Montreal firm ACDF Architecture has created a new arts centre in the suburbs, fronted by a colonnade of vertical and angled stainless steel supports (+ slideshow).

The institution is named the Diane Dufresne Art Centre, after the Quebec artist, and is located in the suburban town of Repentigny.

The single-storey building is intended to allow local residents to enjoy arts and culture without taking the highway to nearby Montreal, and to trigger further development of arts-focused building in the area.

"It is the kick-off element to transform a once-sparse, under-utilised park into a cultural corridor with thematic gardens, a civic plaza and a theatre," said ACDF.

A reflecting pool was placed in front of the building, mirroring the facade's skewed colonnade of massive pillars clad in stainless steel.

"The row of shimmering columns gleams in the sun, their reflectivity calling to passers-by as well as amplifying and dramatising the surroundings, such as sunlight, vegetation, and seasonal colours," ACDF said.

The interior is made up of three wood-clad volumes with rounded edges. 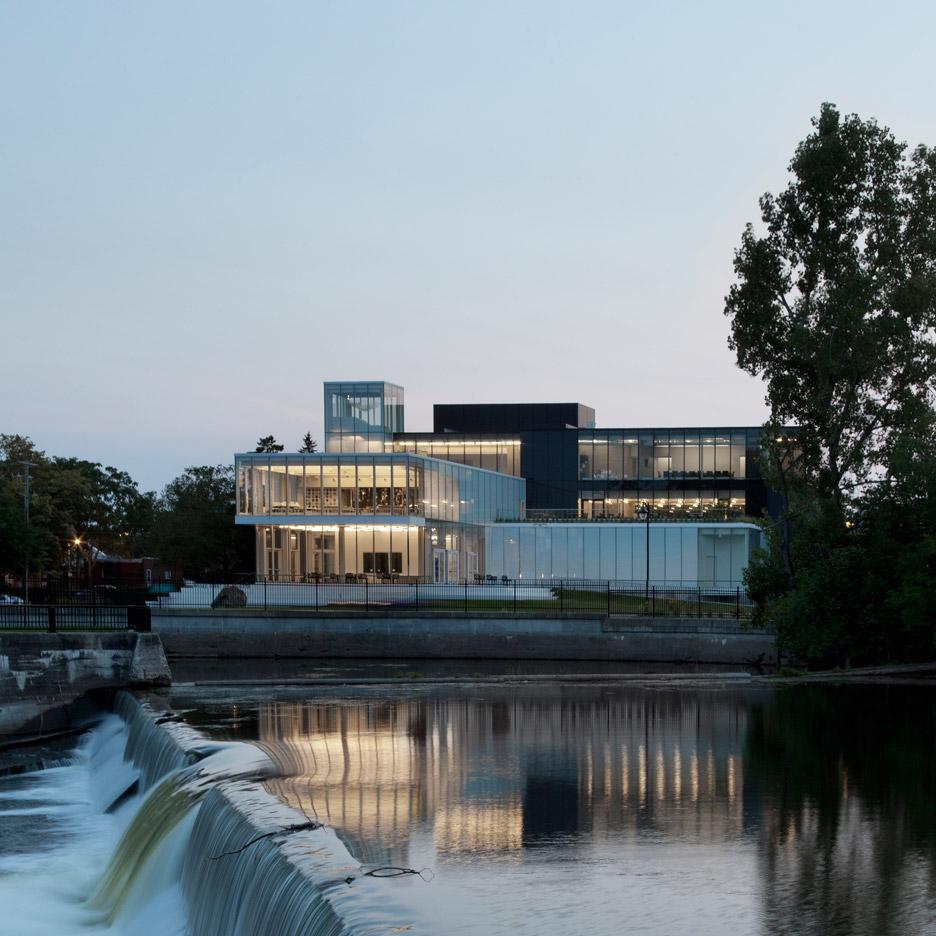 One contains a multi-purpose room, the second a dance recital space, and the third encompasses an art gallery.

Interior finishes were left intentionally bare to give the art more visual importance.

"To contrast the metal's slickness, the three sinuous volumes in the interior are clad in locally sourced wood, which emanates warmth under an array of skylights," said the studio.

The building's colonnade and interior volume are offset to create a public space where visitors can wander.

Full-height glazing allows glimpses of the activities inside.

The architects envision the space as an amenity that will also attract nighttime visitors.

The mirrored pond reflects light from within the building, illuminating a surrounding park.

"The reflections express a sense of temporality, which will instil a sense of calm for years to come," said ACDF, which also recently completed a holiday home with a cantilevered living room.

The province of Quebec is home to other recent cultural projects, signalling a small renaissance of the arts in the region.