Vector Architects has draped lengths of wire mesh over the entrance to a museum housed in a former warehouse in Beijing (+ slideshow).

The local studio was asked to transform the entrance to the M Woods museum in Beijing's 798 Art Zone, to improve visitor experience and create a stronger visual identity for the building.

The small holes in the mesh reveal the building's original brick facade and windows behind, but also create a clear new entrance point and signage for the museum.

"The translucency and reflectivity of the metal mesh turns the entrance facade into a more lively condition, since the mesh can bring sunlight to where it is in shadow," said the studio.

"Our primary strategy is not to reform the exiting facade, but to add a layer of translucency on it," it added. "Hence people are able to sense the old when they experience the new, and read the historical information of the city." 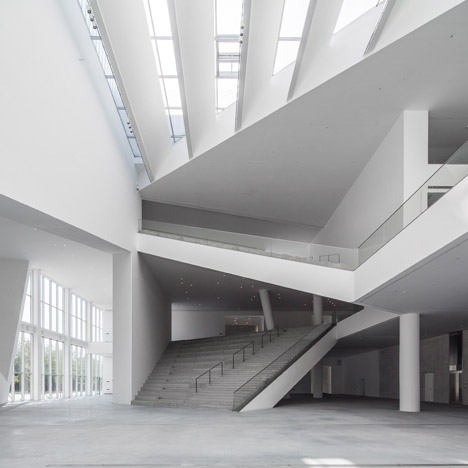 The architects chose lightweight galvanised iron wire mesh as the primary material for the M Woods Entrance Revitalisation due to time and budget limitations. The whole project, from design to construction, was completed in just 40 days.

The same draping technique was also used to revitalise a strip of disused space outside the museum, creating a space to sit, for children to play and to host a Sunday farmers market.

The pieces of mesh create a scalloped canopy over this patio area, visually connecting it with the museum.

"In the past two decades, Chinese cities have experienced a rapid development: a substantial amount of old buildings, streets, historical blocks, and even topography were wiped out and replaced by newly 'designed' urban appearances," said the studio.

"Our living environment becomes more generic but unfamiliar progressively, and this separates our emotion from the settlement we live on," it continued.

"Therefore the key issue of the design is to rethink the urban renewal. Although our existing structure is not a historical heritage, such old architecture is still precious, since it reflects the trace of time."

M Woods forms part of the 798 Art Zone in a set of former factory buildings in Beijing's Chaoyang District.

Groups of artists began moving into the buildings in the mid 90s and the site has gradually evolved to include galleries, museums and a theatre with folding walls.

It reflects the major arts boom in China, which has seen over 3,500 new museums built since 1978.