Knitted lab-grown meat and windows that can charge smartphones feature in an exhibition of socially focused design at Amsterdam's Stedelijk Museum (+ slideshow).

The works of 26 designers are in the show, which is focused largely on design created to address social issues, including humanitarian or ecological disasters. The exhibition also features projects that challenge everyday consumerism, by promoting repairing or recycling.

Marjan van Aubel's Current Window, which uses a layer of solar cells to convert sunlight to electrical energy that can be used to charge devices, is included in the show, alongside Boyan Slat's Ocean Cleanup design, which seeks to strip plastic from the seas.

Both designs have already found wider success, with a prototype of Slat's recycling platform being tested in the North Sea this year, and van Aubel's solar panel concept being translated into a further range of products via her company Caventou.

Several other pieces in the show are focused on the reuse of materials, including Benedikt Fischer's collection of brooches made from recycled ski helmets, and Studio Drift's Obsidian mirror, fabricated from chemical waste.

Other designers have tackled environmental issues, including Studio Roosegaarde. It is presenting the Smog Free Ring, made from processed particular matter trapped in Rotterdam's Smog Free Tower, which filters pollution from the city.

Next Nature Network is showing an alternative to traditional food production, with its speculative In Vitro Meat Cookbook. It includes recipes for meat grown in a lab – including bone marrow cocktail and meat fruit pie. 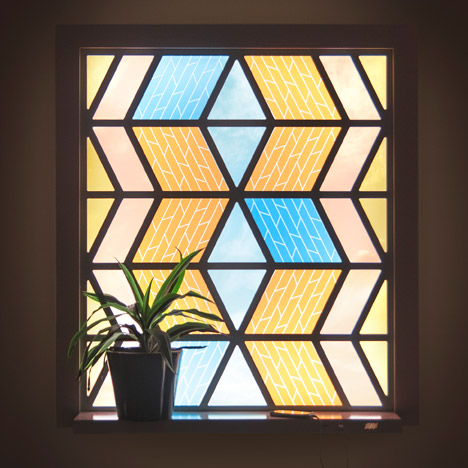 Also on display are Formafantasma's explorations into bio-based polymer packaging, an emergency shelter made from crop residue and an ethically produced smartphone.

"Idealism is not new to design, but now we're seeing a change of emphasis: the focus has shifted from the design object to the idea itself," said the show's curator, Lennart Booij.

"Sometimes this 'social design' produces immediately useful applications, but it's the designers' critical thinking and imagination that sparks new ways of thinking."

All work included in the Dreaming Out Loud exhibition was selected as part of an open call for submissions and whittled down from a long list of 250 projects.

The exhibition opens on 26 August and remains on display until 1 January 2017. The museum intends to acquire pieces from the show for its permanent collection, and will announce which will be added later in the year.