Air bubbles mark the stark concrete walls of this house that architects office HDPF has built near Zurich's airport (+ slideshow).

Named Haus Meister, the new family home replaces a 1940s building originally designed as part of a workers' cooperative near in the Zurich municipality Rümlang.

The site's proximity to the airport meant many of the city's typical building restrictions did not apply, allowing Zurich-based HDPF to break from the traditional gabled style of its neighbours.

The resulting rectilinear block has a "formal severity" with unadorned concrete walls, a flat roof and subtle detailing.

The upper floor of the three-storey building is almost imperceivably twisted away from the two floors below. Seams in the concrete and rows of slightly recessed windows – some false – define the three floors.

"Solutions to specific details are handled with discretion," said the studio. "A window grid is implied by slightly set back, niche-like surfaces."

"The use of fewer window types and a restrained formwork pattern allow the storey-high twisting to emerge as a distinctive motif of the facade." 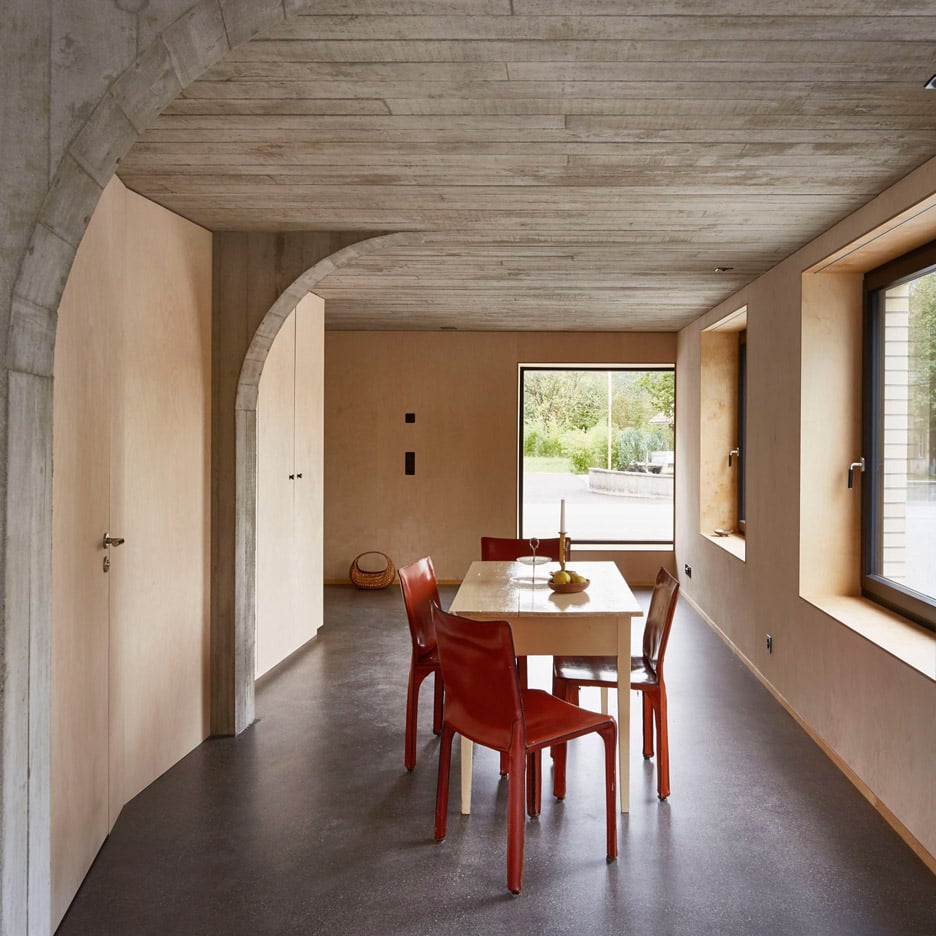 The walls are subtly pock-marked by air bubbles trapped during the casting process, while windows and doors are surrounded by more textured frames.

A stilted steel balcony forms a canopy over the main entrance to the house.

Inside, concrete surfaces are left exposed and paired with white brick walls, a concrete staircase and wooden furniture.

Rooms connect directly to each other, mitigating the need for corridors and maximising space in each of the rooms.

"Inside the building, the modest dimensions and the decision to eschew hallways create a sense of intimacy," said the architects.

"In each room, the corporeal building envelope of insulating concrete is omnipresent."

HDPF also designed a cast-concrete garage for the site, which matches the design of the house.

Other examples of buildings with raw concrete walls in Zurich include a glass-enveloped home designed Christian Kerez, and an apartment block by Gus Wüstemann featuring walls textured by oriented strand formwork.

Gianni Botsford Architects also used the material to create a boxy smoking pavilion in the garden of a private house.

Photography is by Valentin Jeck.