Students at the Fay Jones School of Architecture and Design have designed and built a prefabricated house in Little Rock, Arkansas, from two modules stacked perpendicular to one another (+ slideshow).

It was produced by a team at Fay Jones School of Architecture and Design, based in the city of Fayetteville, then transported and installed at a site in the Pettaway Park neighbourhood of Little Rock in 2012.

The building comprises a pair of cuboid modules. Measuring 16 by 32 feet, (4.9 by 9.8 metres), the lower section contains the kitchen, living and dining spaces, as well as a small WC under the stairs.

A slightly longer module with two bedrooms and a larger bathroom sits on top, rotated 90 degrees and positioned at one end of the volume below.

"By rotating the modules perpendicular to each other, three exterior spaces are created — two porches covered by the cantilevers and a roof deck above the kitchen on top of the lower module," said the team.

The projecting elements of the upper level are made possible by a lightweight steel truss that runs down its longer sides. 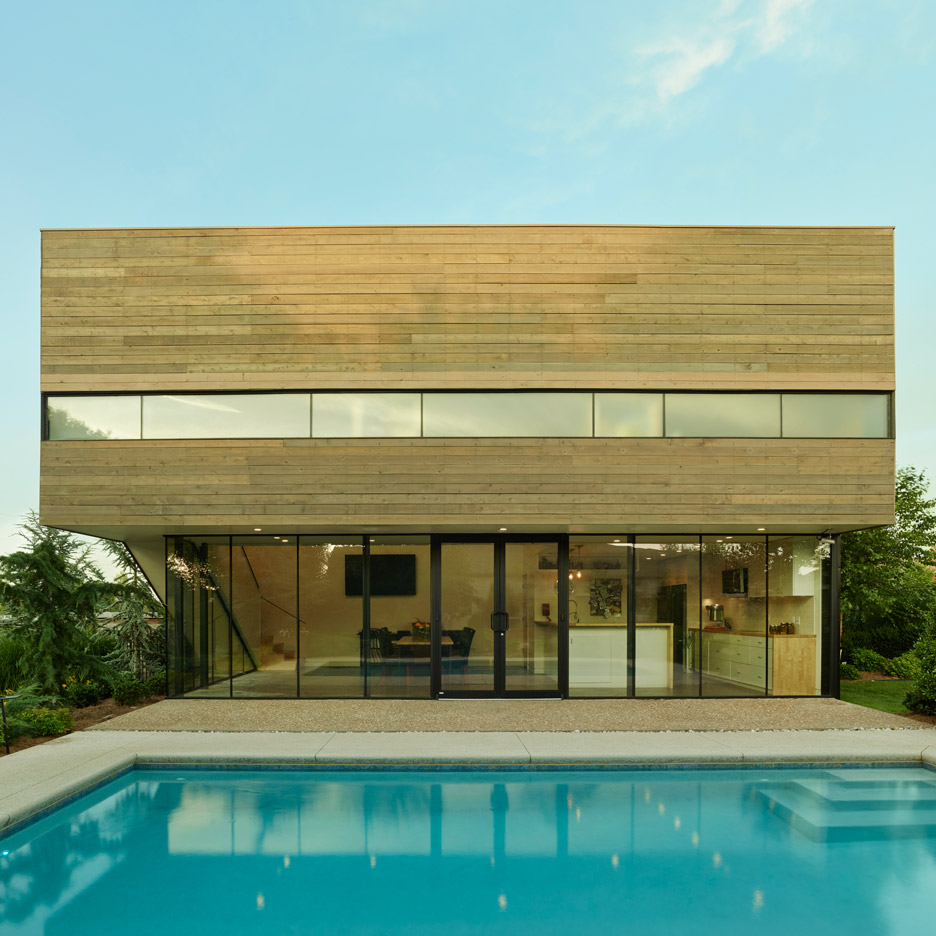 This structure is visible along the north-facing wall through the sheets of translucent plastic used as cladding.

"The north face of the top module reveals the trusses through translucent, polycarbonate material allowing ambient natural light in during the day, and then at night, it becomes a lantern that silhouettes the truss," the team said.

The rest of the external walls are clad in vertical timber planks, which cover the entirety of the south facade but are interrupted by tall windows on the other sides.

A skylight in the roof also allows natural light down the stairwell to the ground floor. The interiors are kept simple with white walls and wood flooring.

The Fay Jones School of Architecture and Design is part of the University of Arkansas.

The University of Colorado also runs a design and build programme, for which its students have completed a series of rustic cabins in the Rocky Mountains and a cabin for a Navajo woman in the Utah desert.