The metal roof of this woodland house in the US state of Arkansas is pinched in the middle so its shape resembles a bowtie (+ slideshow).

Aptly named Bowtie House, the home was designed by local firm deMx Architecture for an elderly couple who receive regular visits from their children and grandchildren.

It is located in the Ozark Mountains, near the eastern edge of Fayetteville, on a heavily wooded 9.75-acre (3.95-hectare) site.

The long, thin structure straddles the sloping terrain and is split over three levels. Its roof is lowest in the middle, then angles upward and outwards at both ends to create higher ceilings and larger windows.

The top of the building is covered with a shell of standing-seam galvalume panels – carbon steel sheets coated with an aluminium-zinc alloy.

The metal roofing is similar to that of another house designed by deMx Architecture in the same area – both taking cues from nearby barns. 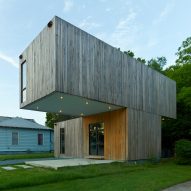 The main living areas and master bedroom are situated on the middle entrance level to accommodate wheelchair access.

A sitting area at one end makes the most of the large southeast window, which opens onto a small covered balcony.

"The living space is defined by the surrounding tree canopies rather than by the window walls comprising its internal limit," said the architects.

The master suite sits at the other end, where the bathroom is afforded the best views.

The central portion of the house packs in the open-plan dining and kitchen on one side, illuminated by a long portion of glazing, and storage and utility areas along the opposite facade with smaller windows.

These spaces are finished with maple flooring, trims and cabinetry.

Above the principal sleeping area, the slanted roof allows for two further bedrooms and a guest bathroom on a floor above.

Both bedrooms have access to a balcony that looks onto the surrounding oak trees.

A garage and additional storage space takes up the lowest storey, which is clad in local stone and accessed by both the home's internal staircase and a meandering driveway outside.

Bowtie House was completed in 2007 for $820,000 (£617,000). Other homes in Arkansas include a prefabricated dwelling built from two modules stacked perpendicular to one another and a pool house featuring an overhanging sleeping loft.