The management team behind a 430-metre-long glass bridge in China say its forced closure just 13 days after opening is completely normal.

Zhangjiajie Grand Canyon Tourism Management told Dezeen it was no "big deal" that the hugely popular attraction closed within a fortnight of opening.

They said overwhelming visitor numbers coupled with their lack of management experience had led to the temporary closure of the Zhangjiajie Grand Canyon Glass Bridge.

"We closed the bridge temporarily – not a big deal – just because we have to upgrade facilities," said a spokesperson for Zhangjiajie Grand Canyon Tourism Management.

"We are still in trial operation stage so it's very normal," they added. "Since we have no experience in an operation of a global range, we had to have a trial stage to gain experience and to improve our internal management. It takes time."

The bridge will remain closed for at least two weeks as work is carried out to upgrade visitor facilities including the online booking system, parking and landscaping. 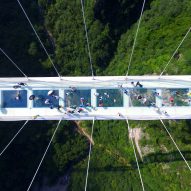 It is believed to be the world's longest and highest glass pedestrian bridge and was designed by Tel Aviv architect Haim Dotan.

Thousands flocked to the attraction when it opened on 20 August 2016, far outstripping its 8,000-person-per-day capacity.

"We're overwhelmed by the volume of visitors," a spokesperson from the Zhangjiajie Grand Canyon's marketing department told CNN at at the time.

Glass panels are set into its steel-framed walkway that links two cliffs, giving visitors vertigo-inducing views and photo opportunities of the canyon.

Wavy handrails line the edges of the glazed walkway, which narrows towards the centre of the canyon to create an exaggerated perspective.

Prior to its closure, there were plans for the bridge to become the launch point for the world's highest bungee jump and a venue for runway shows.

Haim Dotan, who set up his Tel Aviv practice in 1990, is the latest in a string of architects and designers incorporating glass into the bases of bridging structures.

Recently there have also been plans for several glass-bottomed swimming pools – one in London linking two residential towers and another in India's Gujarat state.

All images are copyright Getty Images and used with permission.