Lebanon, Russia and Switzerland have been awarded medals for their contributions to the Biennale, which opened on Wednesday.

At a ceremony held at Somerset House this evening, the jury awarded the London Design Biennale Medal 2016 to the Lebanese installation by architect Annabel Karim Kassar. The award recognises the most exceptional design contribution to the Biennale.

Titled Mezzing in Lebanon, the work brings an interpretation of Beirut's street markets to the banks of the Thames. Kassar describes it as a "relaxed communal space" that creates "an attitude of community and cooperation".

A second medal was awarded to "the most inspiring interpretation of the Biennale's 2016 theme" of Utopia by Design. 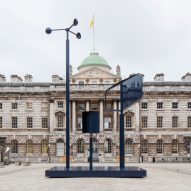 The Utopia Medal was given to Russia, which presented an installation by Alexandra Sankova, director of the Moscow Design Museum.

Main event sponsor Jaguar awarded a medal of its own, the Jaguar Innovation Medal, to the designers from Switzerland.

Led by Giovanna Lisignoli, a team of seven designers from the country created In-between: The Utopia of the Neutral, which imagines the concept of neutrality as a "catalyst for dialogue and engagement".

The jury also commended Chile, Mexico and Japan for their particular responses to the utopian theme.

A fourth prize, the Public Medal, will be announced just before the Biennale's close on 22 September. Visitors can vote online for their favourite installation.

Other installations at the event include a pneumatic messaging system from Turkey, a recycled ocean-plastic table from Australia and 20 interpretations of the white flag from Italy.

The Biennale runs until 27 September 2016 at Somerset House.