Panoramic glazing frames views of meadows and cornfields from this farmhouse designed by Danish studio Norm Architects for a working farm in southern England (+ slideshow).

The single-storey residence – named Reydon Grove Farm – is elevated above its site on a sandstone platform, allowing residents to take in views of the garden and farmland beyond.

It is conceived as a contemporary take on the farmhouse, with a modern design that moves away from more traditional gabled forms like those recently explored by US firms Lloyd Architects and Louise Hill Design with a new barn in Utah.

The elongated Reydon Grove Farm block has a flat overhanging roof that shelters a walkway around the house. The Copenhagen studio run by Jonas Bjerre-Poulsen and Kasper Ronn placed the house close by a group of mature trees, which screen it from the wind and separate its garden from the fields. 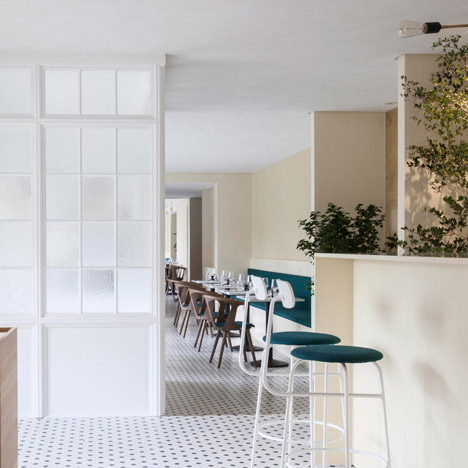 "The Reydon Grove Farm has been designed as a long and narrow flat-roofed pavilion, to give the building a sufficient magnitude and scale to correspond with sizes of the existing barn and the old dairies on the site," said the architects.

"The long structure is placed on the edge of the property, perfectly conveying the transition from the meadowlands to the cultivated farmland and private enclosed garden," they added.

Areas between windows are covered in planks of larch, which are arranged vertically to match the cladding of existing buildings on the site.

The two chimneys are made from dark grey brickwork that is intended to harmonise with the cladding as the wood ages, as well as the dark grey window frames.

Inside, the 247-square-metre floor plan is split into two main sections separated by a central hall.

One section contains the lounge, dining area and kitchen, while the other is more private and has bedrooms and bathrooms.

"One half of the bungalow is designed as one big room, divided into different areas with different functions," explained the architects.

"The internal layout of the house is an open space plan with long views, divided by freestanding elements into different functional zones," they added. "The design of the facade is all about transparency, letting nature be an integral part of the interior and framing views of the extraordinary settings."

A fireplace divides the living room from the kitchen, and a utility space separates the kitchen from the entrance hall.

A further hallway runs the length of the building behind the glazing, linking the open-plan living space with the bedrooms, which are screened by white walls.