RooyDaad Architects created this monochrome house as a weekend retreat from their practice in Tehran, and based its design on a housing model by Le Corbusier (+ slideshow).

RooyDaad founders Zahra Armand and Mostafa Omidbakhsh based the design of their 135-square-metre holiday home in Iran on Le Corbusier's Maison Dom-ino.

This 1914 minimal prototype for mass-produced housing was a two-storey building that would be made from concrete slabs supported by six thin columns with a simple staircase, but was never realised by the architect.

The couple wanted to apply this "simple and logical" design to their second home, which is located in West Zavat on Iran's northern coast. 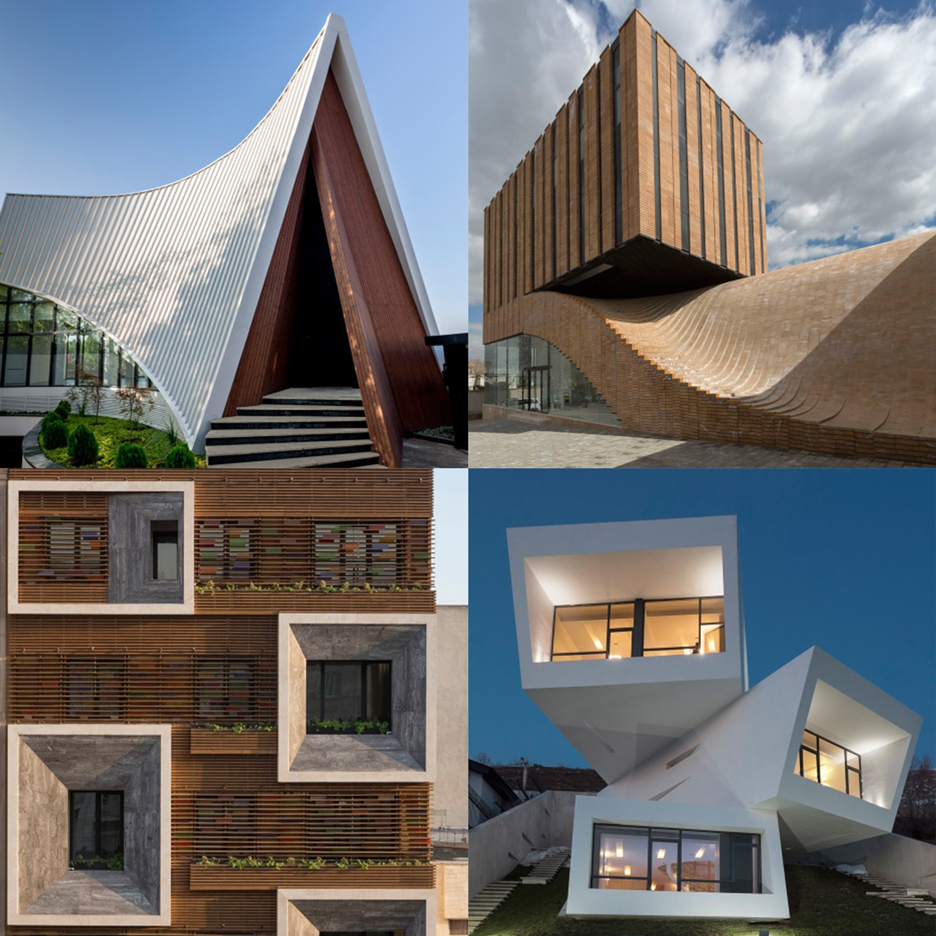 11 of the best new buildings from Iran's architectural awakening

"Maison Dom-ino is an ever present ghost in contemporary architecture," they said. "It is a perfect architectural prototype for an era obsessed with customisation and participation."

Their building is covered inside and out in smooth cement plaster. The outer walls are painted black and intentionally have no decoration, placing emphasis on the bright and white spaces within and views out of the house.

Shuttered windows allow the architects to control the amount of light that enters through the large rear windows, which overlook an orangery. At ground floor level the windows open out to a sheltered terrace.

The architects customised the Maison Dom-ino model further by adding a sloping roof, a balustrade and a slatted wall at the top of the staircase.

Different sized windows at the front of the house suggest the glazing arrangements of some of the 20th century architect's later buildings.

"We chose an artistic, minimalist expression, accordant with the simplicity of Le Corbusier's Dom-ino frame for the interior spaces; a reaction to today's architecture meltdown," said Armand and Omidbakhsh.

"Minimalism, clarity in design, space fluidity, functional flexibility, and visual continuity, created a unified but rather fantastic interior design without any complexities," they added.

Almost all of the surfaces and furniture within the house are white. Small details like upholstery, the television and an ornament of a bird are black.

The project is named Golestaneh after a poem by the Iranian poet Sohrab Sepehri that describes an idyllic pastoral landscape.

Iran is currently experiencing a construction boom. While architecture has largely been a profitable business despite the economic sanctions the country faced in recent years, Armand and Omidbakhsh told Dezeen that a major shift in clientele was changing the industry.

"Most clients of the recent projects that you have published on Dezeen are the second generation of the Islamic Revolution," they said. "They are educated and for them architecture does not serve only as a solution for the problem of shelter any more."

Photography is by Arash Ashornia.