Kengo Kuma is the latest high-profile name to create a tea service for Georg Jensen, basing his design on traditional Japanese sets (+ slideshow).

Kuma's tea service – named Kusa after the Japanese word for grass – will be priced at £60,500 and limited to 11 editions. Each consists of a tea-leaf pot, stirrer, spoon, tray and cup.

The cup and pot are made from silver, with a contrasting mirror finish on the inside and a dark oxidised surface on the outside. 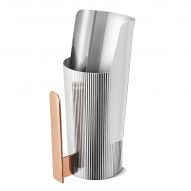 Kuma used bamboo – a traditional material in Asia – to create the stirrer, and hammered silver for the circular tray. A criss-cross latticework of silver covers the oxidised vessels.

Each piece has been made by hand, and will be stamped with Kuma's signature and the Georg Jensen maker's mark.

"I use an intuitive approach, so I respect and welcomed the process of working with the craftsman and silversmiths in Copenhagen," said Kuma. "That relationship enriches the final design; otherwise, you're just designing what you know."

"When collaborating, you think you've reached your limit, but then you push yourself beyond what you thought possible."

Kuma, who is set to design the Japan National Stadium for the 2020 Olympics, is the fifth architect to collaborate with Georg Jensen.

Earlier this year, the company released a collection of jewellery designed by Zaha Hadid before her unexpected death. 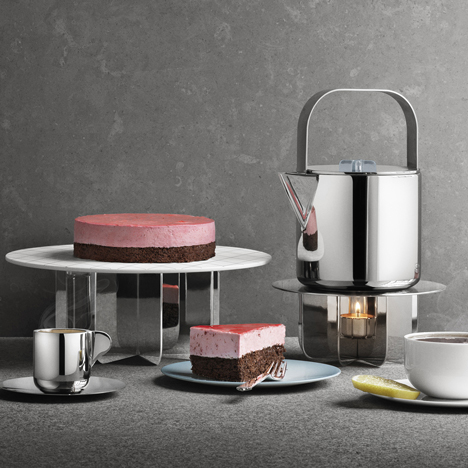 Tea with Georg by Scholten & Baijings for Georg Jensen

The collaborations are part of an attempt – led by CEO David Chu, who joined the company three years ago – to shake up the company's "dusty" reputation by reinvigorating its history of artistic partnerships.

"We are probably a designer's brand," Chu told Dezeen in an interview. "It's a fantastic position to be in. It's like being the most beautiful girl at the party: you get the most choice."