Created through his studio Layer, Foil is a 20-metre-long kinetic sculpture running down the London museum's elongated tapestry room.

Tiny triangles of stainless steel cover the structure, which was created with support from Braun and takes inspiration from the German manufacturer's electric razors.

"We wanted to take some of that super-German engineering, and some of the things people overlook in shavers and products like that and turn up the volume on it, turn up the scale," Hubert told Dezeen.

"Ultimately we wanted to turn it into something that wasn't about the product, it was about the experience."

Hubert describes the overall effect as "a little bit like taking a disco ball, peeling it like an orange, laying it out flat and rippling it".

However, Foil also creates an immersive, meditative environment that inspires visitors to the room to linger, slow down and lower their voices to a hush. 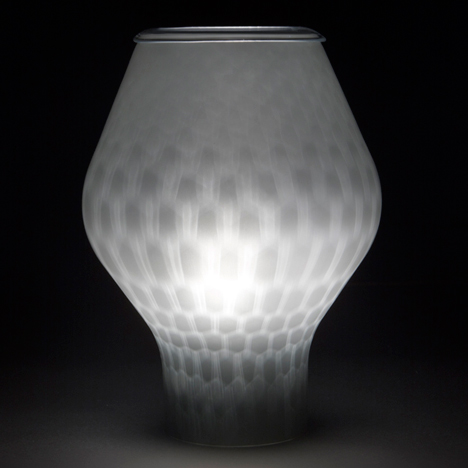 Layer's choice of space – Room 94 – is the only one in the V&A that's entirely climate controlled, so that light, humidity and temperature do not damage the medieval tapestries hanging on the walls.

It means the room has a noticeably different atmosphere to the rest of the museum. This is enhanced by the Foil installation, which reflects dappled light from a tailored LED lighting system onto the darkened walls.

"For us it was about creating an environment that people would spend five, 10, 15 minutes in and just enjoy it."

Foil moves in a smooth rippling motion created by the movement of 200 legs branching off a central axle. A motor at one end powers the installation.

The whole contraption is covered in a strip of latex dotted with 50,000 mirror-finished stainless steel triangles.

These triangles are based on the little perforations in a shaver foil, which covers the blades and captures hairs in its slots in order to create a closer shave.

Foil will stay at the V&A for the duration of the London Design Festival, which takes place from 17 to 25 September 2016.

Also at the V&A is a seascape sculpted from black marble by Mathieu Lehanneur. Elsewhere in the capital, Asif Khan has created plant-filled pavilions, and Alison Brooks installed a giant smile made from cross-laminated tulipwood.