Collectively grouped under the umbrella of Toilet Break, the works are presented by design magazine Dirty Furniture together with the Shit Museum – a project that this year won a Milano Design Award when it exhibited in Milan.

A "promoter of the debate on informed, sustainable design", the Shit Museum has made its full range of tableware, flowerpots, vases, tiles, tables and seating available to purchase for the first time during the festival. 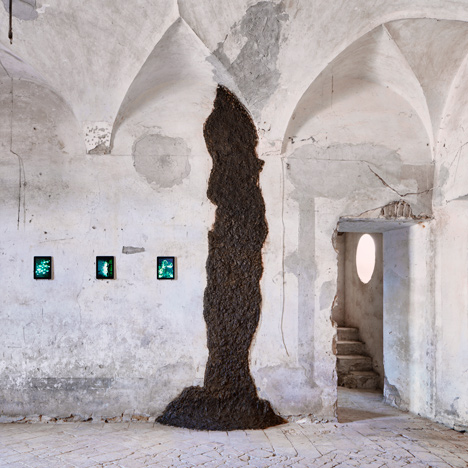 Titled Merdacotta, the range is made from recycled cow manure mixed with clay.

"We were horrified at the idea that shit was considered waste," Shit Museum curator Luca Cipelletti told Dezeen during Milan design week. "So we mixed shit with clay to create Merdacotta – the new enemy of terracotta."

In the Merdacotta process, huge industrial digesters extract the methane and urea from the manure, which removes the associated smell. The methane is then burnt to produce electricity, ensuring that nothing is wasted.

Alongside the Shit Museum's contribution, Dirty Furniture is presenting a second exhibition titled On the Go, which showcases a newly commissioned speculative project.

Heavy Load is by Takram London, the British outpost of design studio Takram, which has previously proposed an artificial organ to help the body use water more efficiently.

The fictional scenario imagines a place where workers wear "automatic toileting devices" in order to "increase their efficiency and compete with automation, but also to liberate them from one of our most limiting human needs".

"If workers now commonly use prosthetics to support their muscles and facilitate their labour, why should bowel motions be excluded from augmentation?"

The final area of Toilet Break is an event space for debates decorated by Cipelletti. It includes Merdacotta seats, a Merdacotta lectern for the moderator and a video shot in the museum's home on the dairy farm of Castelbosco, Italy as visual entertainment.

This year's London Design Festival officially began during the weekend, with events and installations taking place across the capital until 25 September 2016.

Also for the festival, architect Asif Khan installed plant-filled pavilions across Shoreditch, while Lee Broom transformed his store into a giant optical illusion.