British artist Conrad Shawcross has installed a 49-metre-high structure around the soon-to-be built chimneys of an energy centre on Greenwich Peninsula in southeast London (+ movie).

The monumental structure, which is only three metres deep, is designed to disguise the chimneys of the energy centre, which will provide sustainable energy for the surrounding houses.

"My proposal was quite radical," said Shawcross, who at 39 is the youngest living member of the Royal Academy of Art.

"It removed the entire primary frame and the solid climbing system and replaced it with a much more efficient primary frame," he told Dezeen.

The facade is constructed from perforated aluminium panels, which are folded and organised to create a moiré optical effect. 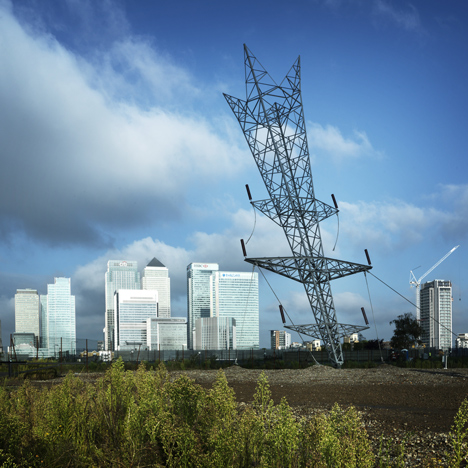 The perforations are overlaid in such a way that the surface of the structure appears to undergo a continuous visual change as the light changes over the course of a day.

"The interference of the two similar patterns placed up against each other is how it creates this illusion, almost of a holographic effect," said Shawcross.

"I realised there was this very amazing opportunity to take advantage of the fact that the structure was facing east to west. When the sun is on the one side, you’ll find that the structure becomes very translucent and very structural. But when the sun hits it from the other side, it appears to be solid."

Depending on the angle at which the structure is viewed, the appearance changes completely. The effect will also change when the chimneys are erected within the structure.

"It's very sensitive to the light conditions and to where the sun is in relation to you and your eye, so it just has these different appearances of being solid to it being completely ephemeral," added Shawcross.

But Shawcross insists that the structure is not a sculpture. He said his intention was to "defy definition and to oscillate between meanings".

"It's not the Optic Sculpture, this is the Optic Cloak," he said. "There's something inside it which is separate from it – the cloak will be a disguise, a way of concealing something but also celebrating it."

The redevelopment of Greenwich Peninsula includes the creation of 15,000 new homes, as well as cultural and sports facilities for the seven surrounding neighbourhoods.

The low-carbon energy centre lies at the heart of the regeneration, with the hope that it will save between 15 and 20 thousand tonnes of carbon each year.

Based in London, Conrad Shawcross is famed for installations including the The Nervous System, Fraction and Three Perpetual Chords.

He isn't the first artist to contribute to the Greenwich Peninsula. Last year's London Design Festival saw the installation of Alex Chinneck's A Bullet from a Shooting Star, another commission by the Hong Kong-based Knight Dragon.

Movie is by Pentagram. Photography is by Marc Wilmot.