Hay co-owners Mette Hay, Rolf Hay and Troels Holch Povlsen purchased 50 per cent of &tradition's shares and will join the company's board of directors.

Anders Holch Povlsen, son of Troels and CEO of fashion chain Bestseller, gained a further 25 per cent of the shares. &tradition founder Martin Kornbek Hansen owns the remaining 25 per cent and will remain chief executive officer.

&tradition, which was founded in 2010, is a Danish company that regularly collaborates with a large number of designers including Luca Nichetto, Samuel Wilkinson and Jaime Hayón.

Speaking to Dezeen, Rolf said &tradition had approached Hay about a sale. He said they decided to proceed as they felt the brand had strong products, plus a thriving presence in southern Europe. 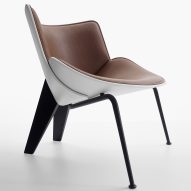 B&B Italia expands into luxury kitchens with purchase of Arclinea

While the Hay owners will now sit on the board of directors, &tradition will remain a distinct entity with its own art direction, management and products.

Rolf hopes that Hay will be able to help &tradition reach a bigger market. He also intends to continue &tradition's practice of reissuing classic Danish pieces – something he supports but doesn't wish to pursue with Hay.

Hay is part of Nine United, a private group of companies headed by Troels Holch Povlsen. It was founded by Rolf and Mette in 2002 and has gone on to become one of the biggest Scandinavian design brands in the world – experiencing at least 30 per cent growth each year for the past decade.

The company has recently pursued the Asian market, launched its first Chinese store in Shanghai two years ago and opening a second in the city earlier this year. It also has a store in Beijing.

"It's going very well but it's a totally new market," Mette told Dezeen earlier this year.

She added that Ikea – another recent collaborator – was helping brands like Hay in the new market.

"They're educating people in in how to make a nice home," she said. "I believe they are helping us."