This hillside dwelling in rural Connecticut by Allee Architecture features a copper roof and facades made of glass, cedar and teak (+ slideshow).

The Bull Mountain Residence is located in Kent, a small village in western Connecticut. Situated on a steep slope, the home overlooks a patchwork of woods and agricultural fields.

The client purchased a virgin parcel of land and wanted a modern yet cosy home that capitalised on its setting.

"They had a simple request: design a house that was inherently modern in its spatial flow and plan organisation, but one that was humane and warm, and allowed an intimate and immediate relationship to the outdoors," said Allee Architecture.

In response, the firm conceived an L-shaped house that wraps a courtyard and sits atop a plinth made of slate. The exterior is composed of glass, copper, Western red cedar and teak, while the structural frame was constructed of Douglas fir. 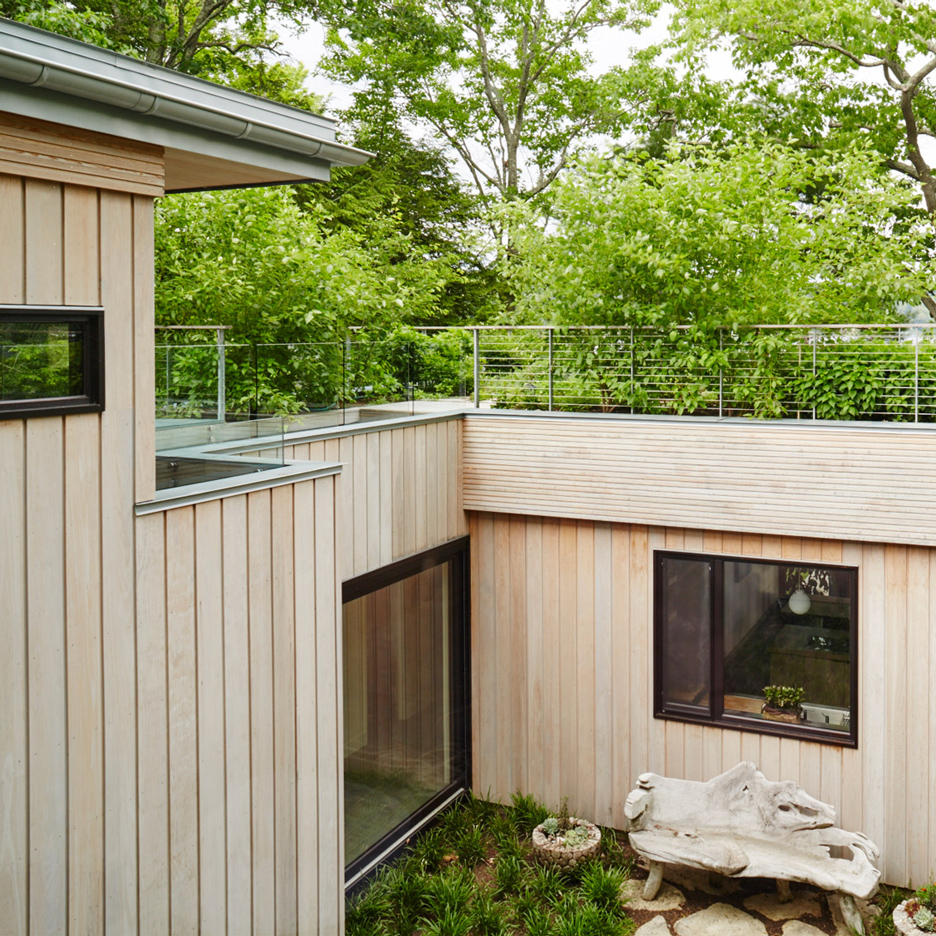 Emerging from the roof is a large chimney made of irregular slate bricks, or sculpings, which are a byproduct of the slate roofing industry.

The west and south elevations, which face the scenic valley below, feature a band of sliding glass doors that open onto a terrace. Climbing vines wrap columns that support a wooden canopy structure.

"This window wall brings the views of the farmland into the main social rooms of the house while allowing immediate access to the terrace from almost any location," the architect said.

The other sides of the home look toward the courtyard and a stone bluff. "The facades facing the courtyard are characterised by discrete punched openings located to frame richly detailed views of the cascading stonescape," the architect described.

The layout transitions from public to more private spaces, with doors and hallways used sparingly.

"Moving through the house is a process of moving between rooms rather than from room to hallway to room again," said the firm, which was founded in 2002 and has offices in Connecticut, New York and New Jersey.

A simple shed building, used for storing tractors and gardening equipment, was constructed next to the house and helps define an entry court. The home also features a carport.

Other residential projects in Connecticut include an artist's studio and home clad with bright red siding by Roger Ferris + Partners and Toshiko Mori's renovation of a house originally designed by famed architect Marcel Breuer.