The British firm led by architects Richard Rogers, Graham Stirk and Ivan Harbour designed the 14-storey building for  a site by London Bridge, just a stone's throw from The Shard.

Services are arranged in four stacked "villages" intended to create a human-scaled environment that is uplifting and non-institutional for patients. The four blocks host a welcome area, radiotherapy and chemotherapy services and an outpatient unit.

"Architecture has the ability and responsibility to improve people's lives and nowhere is this more important than in a building dedicated to making people well," said Ivan Harbour.

"Our aim has been to create a place equally focused on patient care and treatment, a welcoming building of human scale that does not feel like a hospital but delivers state-of-the-art treatment in an uplifting environment for visitors and staff," he added.

Clinical treatment areas are set at the north end of the site, while more social areas are placed at the south and decorated with artwork. 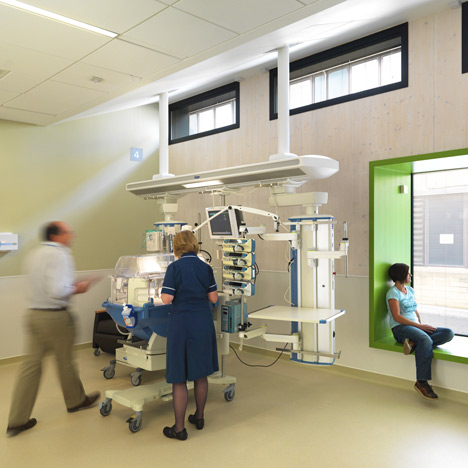 "The organisation of the building is based around this, along with the idea of breaking the building up into two- or three-storey villages that create a human scale," said RSHP associate partner Steve Martin.

Rows of metal balconies wrap the building's facades, which are covered in a combination of metallic louvres and brightly coloured paneling.

Inside, bare concrete walls are complemented by pale timber walkways and exposed metalwork that lends the space an industrial appearance.

The Cancer Centre is the latest in a string of redevelopments projects at Guy's and St Thomas' NHS Foundation Trust.

Last year, Penoyre & Prasad reskinned the Constructivist-influenced Guy's Tower – giving it back its crown as the tallest hospital in the world. Improvement works are also being carried out on the hospital's accident and emergency facilities, and operating theatres.

RSHP previously designed a Maggie's Centre for cancer treatment in west London, which was also intended to have a non-clinical appearance.

The London-based firm relocated from it's river side headquarters in Thames Wharf to its self-designed Leadenhall Building earlier this year. Other recent projects include an International Spy Museum in Washington DC and a bank headquarters in Mexico City.