Dutch office Studio MAKS has built a compact concrete house in an old industrial area of Deventer, the Netherlands, for a young couple on a tight budget (+ slideshow).

Deventer House is situated on a plot of land surrounded by the old harbour warehouses of the inland city on the IJssel river. Here, young people have been given land to build their own homes.

They aimed to use low-cost, durable materials for both inside and out – but had to be cautious in their material choices to keep with the strict budget imposed by the clients.

In the end they chose to give the building a concrete facade, which offers a contrast to the stark white interior. The concrete is textured by the wooden boards used in the casting process.

"We originally tried to continue the concrete from the exterior into the interior," Studio MAKS told Dezeen. 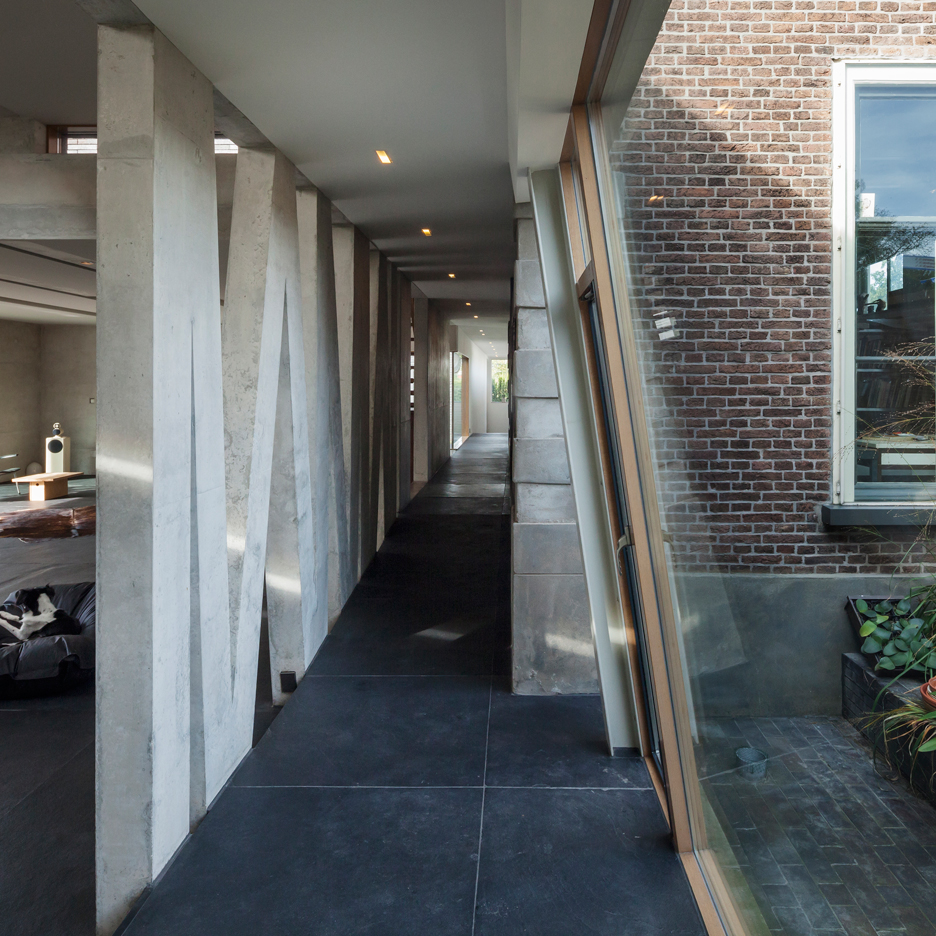 "Instead we opted for the idea of a very light, material-less interior to create a contrast with the very rough, materialised exterior."

The ground floor of the building contains a living room, a separate kitchen and dining room, an entrance lobby. The first floor accommodates two bedrooms, a bathroom and a small office.

On both levels, storage in every room is provided by either recessed shelving units or cupboards slotted into the walls.

"From the beginning the client wanted a house with many rooms," the studio told Dezeen. "We agreed, but then convinced them to create large openings between the different spaces, to maintain a sense of spaciousness."

To further maximise space, seating is also built into the wall that separates the entrance lobby from the living space.

The Dutch studio said they "utilised every single square centimetre of the house's open spaces as well as its solid ones".

Furnishings are largely white or grey, to allow the clients to impose their own personality on the house. The white kitchen units came from Swedish design brand Ikea, while other additions include pastel-toned cushions and plants.

The staircase is concealed behind a door, and a downstairs toilet slots in underneath it.

Deventer is located in the east of the Netherlands. Other noteworthy architecture projects in the area include a mixed-use block with a scale-like exterior and a grain silo converted into a community food hall.