Californian firm Rapt Studio designed this pared-back photography studio for a company that instantly sends the results of shoots to a customer's mobile device.

The Blink Inc service allows users to book shoots, see photos as they're taken and purchase the images instantly – all from their smartphones.

Rapt was tasked with giving the online company a physical space in Orange County.

"It was critical that their retail photo studios do the same, so we teamed up with Blink to create minimal interiors that lends to a sophisticated space; a sleek photo studio for the Instagram era."

As most of the services are provided digitally, the physical space – located at the Fashion Island shopping centre in Newport Beach – is kept as simple as possible.

Rapt took references from industrial photography studios, and used a predominantly black and white palette for the interior.

Upon entry, customers are faced with two dark volumes that can be used as private changing rooms. 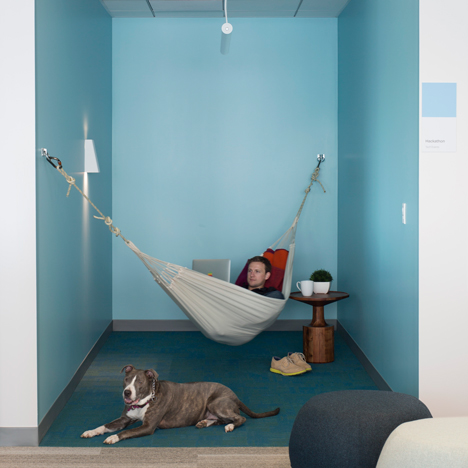 Views of the white photography area are obscured by partitions formed from vertical wooden slats.

"Its sparse and minimal design are purposeful so that the subject takes centre stage," said Rapt, which has previously completed office interiors for companies like Google, HBO, Apple, YouTube and Eventbrite.

Photography studios are usually required to provide a neutral backdrop for shoots. Examples that demonstrate this include a concrete building in Seoul and a Corten steel-clad bunker in London.

However, offices for retouching can be more playful, like a space lined almost entirely with herringbone parquet in the UK capital.