A pierced concrete wall based on camera apertures fronts this photography studio in Forth Worth, Texas, by local firm Ibañez Shaw Architecture.

The Fort Worth Camera Studios is located on the city's Montgomery Street, and houses photography classrooms, studios, galleries and a shop.

The street-facing wall of Ibañez Shaw Architecture's concrete building is punctured with seven lines of holes that vary in size, referencing the different "standard apertures" used to vary amount of light able to reach a camera lens.

As light filters through the openings in the facade, it forms a dappled pattern on the floors in the spaces behind: a hallway on the ground floor and a terrace above.

"The hole pattern in the concrete screen wall depicts the graphic proportionality of seven standard apertures that restrict how much light is allowed to enter the camera," said the studio in a statement. "The openings in the wall are conically flared to increase the visual transparency and graphic presentation."

These holes are among a number of details that Ibañez Shaw Architecture included to allude to the building's use.

Two sets of umbrella lights, commonly used in photo studios, are used to illuminate a conference room and the lobby. Also, photography reflectors on the roof bounce light off the top of the concrete walls that run either side.

"Photography lights and reflectors were incorporated in the design as vestiges of the technology and art for which the building is devoted," said the firm.

Fort Worth Camera Studios is set on a plot that is slightly inclined from north to south, and more prominently sloped from east to west. Its two levels accommodate the level change, with the lower floor roughly half the footprint of the one above. 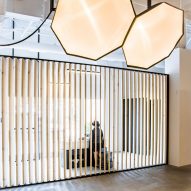 Access to the building is provided on the southern side, behind a wall of perforated white mesh that adjoins the concrete facade. The screen shields the car park and also bears the venue's name in capital letters.

A long and slender retail space runs along one side of this floor. Here, Ibañez Shaw Architecture embedded a set of glass shelves into the concrete wall to form a display for different types of cameras.

Other features of the retail space include a square-shaped window nook that extends out from the northern wall. A thick yellow frame surrounds the opening, designed as a play space for children with matching tiny yellow tables.

A studio and an office are located on the eastern, street-facing side of the lower floor. Both are fronted with the glass wall that rises behind the feature concrete wall, with doors that open onto the deck.

Another studio and a lounge occupy the same spot on the level below. A slender gallery is placed behind to cut the floor in half, and partition a room for finishing photo prints at the rear.

Concrete is left exposed inside most of the building, except in the rooms that need different lighting effects, and are therefore lined.

Fort Worth is located in northern Texas, next to the larger city of Dallas. The photography studios sit opposite The Museum of Science and Historyby Mexican firm Legorreta + Legorreta, while other key buildings nearby include the Modern Art Museum of Fort Worth by Japanese architect Tadao Ando.