Vibrant green stripes and angular roofs add character to the exterior of this school that architecture firm CEBRA has completed in Aabybro, Denmark (+ slideshow).

Aarhus-based CEBRA designed the Aabybro School for the Jammerbugt Municipality, which is located near Aalborg at the very top of the Jutland peninsula.

The architects gave the school a roof with multiple gables to match the scale and proportions of the town's residential buildings, as well as landmarks such as the church and town hall.

"The pitched roof is brought to focus due to its distinctive shape and slanted eaves, which give a unique appearance without being intrusive or alien to the area," said, Mikkel Frost, the studio's founding partner.

"It is a modern version of the pitched roof where the eaves ensures attractive outdoor spaces for education and play," he added.

CEBRA has previously worked on various education projects, including a school with an amphitheatre-style staircase inspired by Mickey Mouse, and a proposal for a school in Russia comprising a ring of buildings arranged around a central garden. 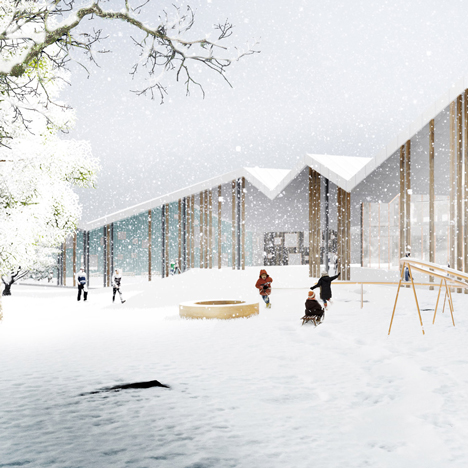 The Aabybro School accommodates around 1,100 children and is constructed on two separate sites, around 250 metres apart.

Part of the design brief was to ensure that the two buildings were able to function independently, yet feel like a connected entity.

"Despite this physical separation, the school has to function and be perceived as one unified whole," Frost added.

"Therefore, the design uses one large basic shape that is cut in half and shifted. The two buildings show a close affinity to each other and naturally appear as siblings."

Other design elements are also employed to ensure aesthetic consistency between the two structures, including a robust concrete base, and an upper level featuring bands of vertical windows and bright green panels.

The colourful surfaces and the incorporation of glazing creates a contrast with the solid concrete volumes, which are punctuated by scattered windows.

The metal roof extends down onto the outer walls of the upper storey, creating a homogenous surface that rests lightly on top of the building. Its projecting edges – supported in places by slender braces – accentuate its lightweight aesthetic.

Each of the two buildings features an H-shaped plan comprising a pair of parallel wings. These are joined by a central atrium that contains shared facilities including the library, canteen and workshops.

The jagged roofs that perch on top of both structures cover the atrium spaces. They also extend outwards to form canopies over terraces that can be used as additional teaching spaces.