London's latest crop of skyscrapers don't give enough back to the city according to British sculptor Antony Gormley, who claims the British capital is growing at the expense of its citizens.

The London-based artist told Dezeen that new developments in his home city are too often modelled on "maximum return on minimum investment", resulting in a lack of adequate public space for local residents.

"A lot of what is being built gets its character from really base economic factors," said Gormley, speaking at the opening of his new White Cube exhibition, Fit.

The artist said that one of the biggest problems is the way many high-rise buildings are designed in isolation, rather than as part of collectives. 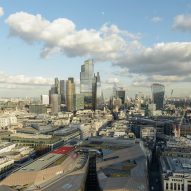 One of the main offenders, according to Gormley, is the Rogers Stirk Harbour-designed Leadenhall Building, which he said is "not a bad building, but it ruins the clarity" of the Square Mile – London's financial centre.

He also has low expectations for PLP Architecture's 22 Bishopsgate and 1 Undershaft by Eric Parry, both also proposed in the area.

"Maybe the Square Mile has its own law and identity that has to look like a profit-and-loss account skyline," said Gormley.

"But I'm very aware of the shadow that will be cast by that collective of buildings," he continued. "It will have a very profound effect on what it feels like to be on the street."

Gormley was part of the committee responsible for awarding one of the first of this skyscraper crop – the Foster + Partners-designed 30 St Mary's Axe, more commonly known as The Gherkin – the Stirling Prize in 2004.

But he said that the "exemplary" amount of public space created in exchange for that building has not been matched by the subsequent developments that now dwarf it.

The placement of these towers needs to be more carefully curated, Gormley said, and designed to also integrate cultural space and affordable housing.

"Someone has to think about what these things do together and hopefully have some responsible input into how that works, both aesthetically but also socially," he stated.

"No doubt there is the need for the Square Mile to have ever more office space, but there has to be a gain in terms of public space and public good."

Gormley is behind large-scale public sculptures including the Angel of the North. Works on show as part of his latest exhibition, Fit, include Sleeping Field – a collection of 500 iron figures organised to look like a landscape of buildings.

The artist works out of a studio in Kings Cross – another area of London undergoing major redevelopment.

He said that the area's gentrification was pushing out the creative industries that made it popular in the first place, and added that they would suffer further following Britain's impending exit from the European Union.

"Culturally it's a bloody disaster," he said. "It makes me angry and sad in equal measures."

"Everything that is happening globally means that we need to be part of wider communities, not small ones."

Read the interview with Antony Gormley:

Jessica Mairs: Your piece Sleeping Fields is a cityscape made up of sleeping bodies. Is it a comment about our lack of engagement in the built environment?

Antony Gormley: This could be a comment about our lack of participation and our lack of consciousness about our second body – our collective body – the city. But you could also say that it's a comment that, in a time when money is encouraged to move, we don't allow the freedom of movement of people. That's a fundamental contradiction in late capitalism.

And so the migrants – those who are allowed in and those that are not allowed in – are put in this position of being in holding situations where they become redundant. Kind of dormant. The dormancy of detention, and that's a shame.

Jessica Mairs: Brexit will affect freedom of movement even further. How do you think that will impact our cities, and its creative industries?

Antony Gormley: Culturally it's a bloody disaster. Somebody said to me that £856 million was immediately wiped from our cultural budget as a result of the Brexit vote. Academically the ability of students to come in without visas, the ability of us to attract teaching staff from other universities around Europe – basically just the freedom of academic access to the community of research and development – it's a disaster. It makes me angry and sad in equal measures.

Of course the European Union wasn't efficient, but everything that has happened since two world wars and everything that is happening globally means that we need to be part of wider communities, not small ones.

Jessica Mairs: How does that relate to architecture?

London has grown – and all cities have to grow – but it can't be at the expense of the citizens. The forums by which citizens contribute to the creative growth of their cities is really important. We're at this point where it's very evident that we need more high-rise, we need higher density, but who is in charge of that? And who is taking an active role in seeing how these high-rise developments work together?

I was on the Stirling committee that gave 30 St Mary's Axe – The Gherkin – its prize. I think it's an exemplary building. It came out of a very active relationship between Peter Rees (the City of London's former chief planning officer) and Norman Foster. And it resulted in a massive increase in public space, because they reduced the footprint at the bottom of the building.

Jessica Mairs: What else, in your opinion, makes that building so special?

Antony Gormley: I think it's an evolution in terms of form. It's an incredibly powerful example of how responsible, sustainable thinking about a building's internal atmosphere – cooling, heating, etc – and the finding of new form can come together.

Unfortunately that example has not been matched elsewhere or to the same level.

The whole question of how collectives of high-rise buildings work with each other – the kind of conversations they have with each other, and indeed the conversations they have with their context – is something that there ought to be more debate about and more understanding of. I'm shocked by the polyglot language – the Can of Ham, The Scalpel, The Cheesegrater – that people use to describe buildings.

Who is taking an active role in seeing how these high-rise developments work together?

Driving down Whitechapel High Street when The Gherkin was on its own was just this fantastic thing. Here was this building that was like Brancusi's Bird in Space, which grew us into the core of the city. That view has now been totally compromised by The Cheesegrater. The Cheesegrater is not a bad building, but it ruins the clarity. Now we will get 22 Bishopsgate, plus Eric Parry's tower.

I'm not against diversity, but someone has to think about what these things do together and hopefully have some responsible input into how that works, both aesthetically but also socially.

No doubt there is the need for the Square Mile to have ever more office space, but there has to be a gain in terms of public space and public good.

Jessica Mairs: How important is the inclusion of public space in high-rise developments?

Antony Gormley: To shift now to The Shard; in the early days I was very worried by what it looked like, and what the public realm at the bottom was going to look like. They've finally opened the south side on London Bridge station and they've actually done a very good job I think. It remains to be seen how it works to the west of The Shard and immediately at the bottom. But it felt unlike St Mary's Axe in that we hadn't got much benefit in the public realm, to repay the commercial benefit of the skyscraper.

Maybe the Square Mile has its own law and identity that has to look like a profit-and-loss account skyline, maybe that's the nature of the area. I'm very aware of the shadow that will be cast by that collective of buildings. It will have a very profound effect on what it feels like to be on the street. I don't know who's thinking about these things.

Jessica Mairs: Should there be stricter limitations imposed on skyscrapers – in terms of height or the inclusion of public zones – to address these issues?

I don't think specific restrictions are the thing. I think aesthetic dialogue is the thing

I'm obviously very keen on cultural space, and it seems like, in most of these luxury flat developments, there's a requirement for affordable housing. And I don't understand why there isn't also a requirement for cultural gain. There should be music venues or artists' studios or just an understanding that there needs to be, not just endless cubic meterage of five star luxury, but also the mix of creatives and small businesses.

In that respect, the Kings Cross development is a good example. Even though I have questions about the strange nature of the privatised public space that it contains, I think that's a good mixture of recovered 19th-century buildings. Some of the new architecture is not bad... but I would say there that they've pushed up the land values so that all the artists who were previously there have all gone. I think that that's a mistake, personally.

But the truth is that I love London and I think it's an extraordinary place. Of course it has to change, of course it has to grow. I would love everybody in Britain to be more aware of architecture as a language – that this is actually a language in which we communicate our excitement about being alive, our understanding about materials.

I just feel that a lot of what is being built gets its character from really base economic factors – maximum return on minimum investment. There isn't enough engagement with the responsibility to make really rich and supported environments, not just for the people that occupy the buildings, but for the people that walk by.