Dezeen has teamed up with publisher Notting Hill Editions to give away 10 copies of a collection of essays by Ian Nairn.

Congratulations to the winners! Marco Busani from France, Michael Wi from Indonesia, Judy Hibberd from Australia, John Stiles from the UK, Marcin Kwietowicz from Poland, Agata Murasko from the UK, Zoya Gul Hasan from Pakistan, Diana Ong from Belgium, Raquel Martins from Portugal and Nick Sharp from Canada.

Nairn's Towns is an updated version of Ian Nairn's Britain's Changing Cities essays, first published in 1967. Edited by Dezeen Opinion writer Owen Hatherley, it was reissued in 2013 but is now also available in paperback.

For the new book, Hatherley has written a detailed introduction, in which he describes Nairn as "arguably the finest, and one of the best known English architectural writers of the 20th century".

Notting Hill Editions reissued the series in response to a continuing public fascination with the controversial era of 1960s architecture and urban planning.

The collection is made up of 16 essays that assess historic townscapes, as well as reviews of new buildings. Cities explored include Glasgow and Norwich, Llanidloes and Sheffield.

"Hatherley can dish it out with the best of Nairn when it comes to detailing the dreadful regeneration programmes, empty civic boosterism, shoddy shopping malls, PFI hospitals, and cheap volume house-building schemes, which have continued to blight these towns and cities since the 1960s," said the publishers. 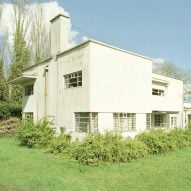 Ian Nairn – a former Royal Air Force pilot without any formal architectural qualifications – made his name with a special issue of the Architectural Review in which he coined the term Subtopia to describe his vision of an architecturally homogenised Britain.

In the 1960s, Nairn contributed to Nikolaus Pevsner's Buildings of England series and published Nairn's London and Nairn's Paris.

He later moved into television, producing Nairn's Travels and Nairn Across Britain for the BBC. He died in 1983 aged 53.

Owen Hatherley is a critic and author, focusing on architecture, politics and culture. His books include Militant Modernism, A Guide to the New Ruins of Great Britain, A New Kind of Bleak: Journeys Through Urban Britain, and The Ministry of Nostalgia.

Notting Hill Editions are giving away five paperback and five hardback copies of the book, which are also available to purchase online. Ten winners will each receive one copy and the type will be chosen by Dezeen.

Founded in 2011 by Tom Kremer, Notting Hill Editions is an independent publisher that produces pocket-sized books covering a wide range of subjects by prominent authors and thinkers, as well as new writers and works in translation.

This competition has now closed. Ten winners will be selected at random and notified by email, and their names will be published at the top of this page. Dezeen competitions are international and entries are accepted from readers in any country.