A chequerboard screen of glazed ceramic tiles in various green hues wraps this house in Barcelona, helping it blend in with the surrounding gardens.

TR House was designed by local architecture office PMMT for a site in the grounds of an existing historic property, which previously belonged to the Indian consulate in Barcelona but is now is owned by the family.

The three-storey residence is positioned on a sloping plot and is partially submerged in the descending ground.

Living areas are oriented towards the rear of the plot to offer as much privacy as possible.

The majority of the front and rear facades are clad in vertical chestnut boards, with openings carefully positioned to make the most of the views while also concealing the inhabitants. 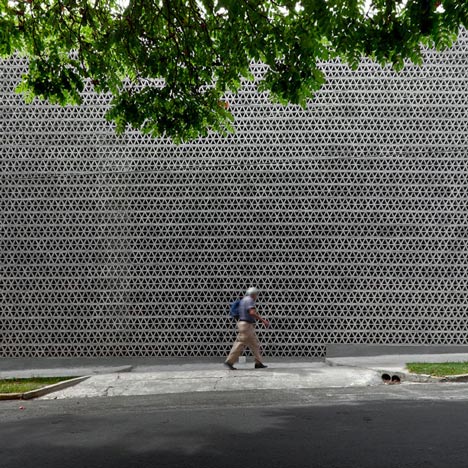 But the remaining facades are wrapped with a semi-solid surface comprising vitrified ceramic tiles fixed to a stainless-steel wire lattice.

The screen provides shade and privacy to outdoor spaces, and also camouflages the house against its green backdrop.

"The exterior facade is a reflection of the functional needs of the interior," architect Alex Herráez told Dezeen.

"With this ceramic curtain, we were able to solve four plans that in architecture are normally solved in separate ways: the facade, the pergola, the curtain walls and the roof," he said.

"Within a range of greens, we've worked with four different tones to obtain the same shades that one observes on the surrounding landscape during the four seasons of the year, creating the required merging feeling."

Due to the steeply sloping plot and the house's integration into the landscape below the level of the street, access to the interior is provided by entrances on different floors.

A curving driveway descends towards a garage at the lowest level, where the main living areas open onto a secluded decked area at the rear of the building.

The main entrance is accommodated on the level above and is reached by a path traversing the garage roof.

Rooms are arranged on both sides of a horizontal axis that extends across the building from the entrance.

At the centre of the building is an open-air patio planted with a pair of birch trees. The patio is flanked on one side by a staircase, and is lined with glazing to enable natural light to permeate down to the surrounding spaces.

Bedrooms are arranged around the central level, with the top floor housing a guest bedroom and office with access to a terrace sheltered beneath the panelled pergola.

The pergola casts dappled shadows across the floor of the terrace and frames views of the treetops at either end.

At the far end of the decked terrace to the rear of the building, the land descends steeply towards a creek at the boundary of the site.

A sequence of sloped surfaces formed from the same chestnut panelling as the facade extends the decking towards a play area at the lowest point.