Furniture designers Tom and Danielle Raffield have used steam-bent timber to cover this extension to an old gamekeeper's lodge in Cornish woodland, which featured in UK television show Grand Designs earlier this month.

The house is set in six acres of woodland at the Trevarno estate in Cornwall, southwest England, where Tom Raffield and his wife Danielle also run their furniture company.

They specialise in steam-bent furniture – a traditional way of shaping timber using heat and moisture – and wanted to apply the same technique to their home.

"We wanted to build a house with the same consideration and attention to detail we put into our furniture and lighting," said Tom Raffield. "Designing objects for other people to put in their home is an incredible privilege."

"We'd never design anything that we wouldn't have in our own home, but we'd never had a chance to design for our own space before."

The two-storey building is attached to the grade II listed lodge and its outbuildings by a glazed passageway.

The building's timber frame is designed by architectural technologist Chris Strike, but the steam-bent finishes are the work of the Raffields.

It is completely covered in lengths of curving beech, larch, sweet chestnut and oak collected from the surrounding woodland.

These woods are also used to create the furniture and lighting that fill the house – including a hanging cocoon chair and sculptural light fittings – while outside a length of timber is bent and twisted away from the facade to create a bench.

"We really wanted to try to use as much timber from within these woodlands," said Tom Raffield.

"Anything that's come down in storms, that's been kept and is going to be used on the outside," added Danielle Raffield.

The extension nestles into the side of a hill behind an existing stone toilet block. Around 3,000 tonnes of earth was removed to create the niche it sits in, and the remaining hillside is reinforced by earth-filled tyres and gabions.

Curving wood-covered walls define rooms within – a lounge, study and open-plan kitchen-diner at ground level and two bedrooms above.

Steam-bent oak and ash cladding surrounds a generous balcony on the upper floor, while the building is linked to the existing toilet block at ground level. The whole structure is then linked to the gamekeeper lodge by a larch and glass passageway.

The whole process was filmed for the Channel 4 television series Grand Designs, which is presented by Kevin McCloud. The show was broadcast on Wednesday 5 October 2016. 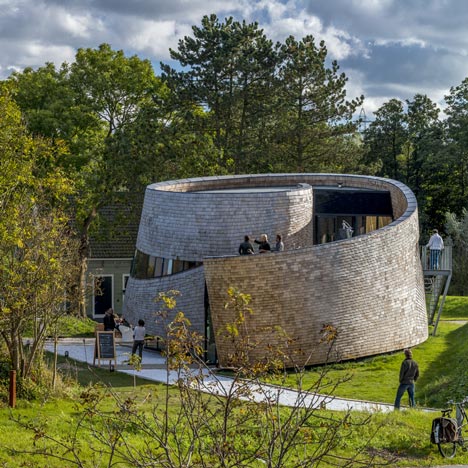