Virgin America has teamed up with creative agency Eleven to create a pair of leather high-top sneakers complete with a seat buckle, Wi-Fi and video screen.

Virgin claims they are the only shoes to date to incorporate these unconventional elements, which are powered by a rechargeable battery. 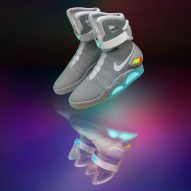 When the auction ends on Sunday 23 October 2016, all proceeds raised will be donated to Soles4Souls, a non-profit charity that aims to fight poverty by distributing shoes and clothing.

The shoes will be delivered to the highest bidder in a custom plexiglass display case with LED lighting.

The futuristic shoes bear a resemblance to the Nike Mags, which tighten automatically once the foot is inserted, just like the pair worn by Michael J Fox's character Marty McFly in the 1989 movie Back To The Future II.

Nike is releasing 89 pairs of the shoes to support Fox's charitable foundation, which raises funds and awareness for Parkinson's disease – which Fox was diagnosed with aged 29.

Other footwear companies releasing connected trainers include Digitsole, whose Smartshoes connect to the wearer's smartphone to warm cold feet and track footsteps.