Herman Miller has unveiled a new version of its bestselling Aeron chair, which has been fine-tuned to make it more responsive to different body types.

The Aeron chair first launched in 1994, and is one of the American company's most famous products with over seven million pieces sold in 134 countries.

Unlike other office chairs on the market at the time, designers Bill Stumpf and Don Chadwick decided to strip the chair of foam and instead opted for a woven back – creating what Herman Miller describes as "a true machine for sitting".

While the updated chair retains the same silhouette, it has been updated with a new suspension system and a revised tilt mechanism that respond better to different body types and activities.

By altering the tilt of the frame by 1.8 degrees forward, it better supports the body in the upright position and across a wider range of postures.

The woven back of the chair is made from a technical fabric named Pellicle, and features eight varied zones of tension. 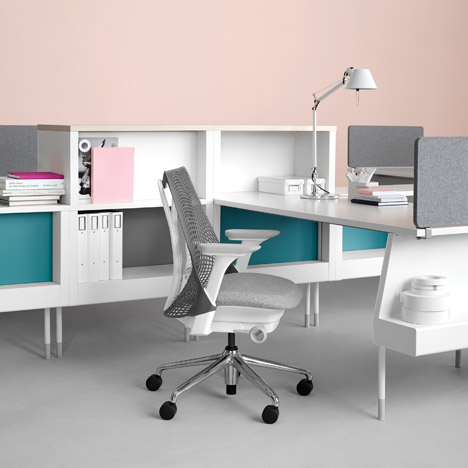 "Its life is going to be much longer because of its sustainability. The selection of the materials, the quality of the finishes and the fit are so important."

The new Aeron chair is available to order now in North America, Latin America and Mexico, the Middle East, and Africa. It will be available in the United Kingdom and Europe in January 2017 and Asia in February 2017.

Herman Miller was founded by DJ De Pree in 1923 and named after the father-in-law who lent him the start-up investment. In nearly a century, it has been responsible for many iconic pieces of furniture design, including the Noguchi Table and the Eames Lounge Chair.

More recently, the US company has launched a reconfigurable office furniture system made from lightweight foam and a chair designed for fidgeters.