The Werner Carriage House is an extension to an 80-year-old home in the Washington-Wallow district in Fayetteville, the third largest city in the central US state.

Buildings in the historic neighbourhood range in style, from Victorian and craftsman to mid-century modern. The addition draws references to the area's varied architecture. 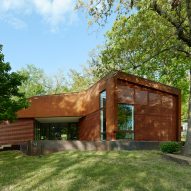 "The Werner Carriage House takes cues from both its historic main house and the context of its neighbouring structures," said deMx Architecture, which was founded by Tim deNoble, a former department head at the nearby Fay Jones School of Architecture and Design, and architect Tim Maddox.

The rectilinear, flat-roofed structure consists of a solid box that floats over a base with a void.

The lower level contains a storage zone and parking area. A staircase leads to the upper storey, where the architects placed a music studio that can double as living quarters or an entertainment room.

The glazed front door is located on the rear elevation, which overlooks the backyard. The team used the colour orange to articulate the stairway and entrance.

"The colour acts as a counterpoint to the more reserved materiality of the existing home – a connection that is completed by the decorative flourish on the home’s entry gable, which is painted in the same orange," the firm said.

The addition is clad in grey siding and shake shingles that match the main Victorian-style home. White trim adorns the cornice of the new structure and dips down to frame a corner window on the front facade.

The trim also borders windows and a recessed opening on the backside of the addition.

"The carriage house borrows materials and the historic colour scheme from the original home and approaches them with new detailing and application," the firm said.

For the lower portion of the addition, the architects used cedar boards for the exterior walls. The material helps denote the functions within.

"Spatially the cedar fence works with the carriage house to provide a physical connection to the existing house, while performing its traditional function of dividing public and private spaces," the architects said.

Other residential projects in Arkansas include a revamped ranch house by Modus Studio clad in cedar and Corten steel and a prefabricated cantilevered residence by students at the Fay Jones School of Architecture and Design.