The Petrified Carpets installation was designed by Alessandra Covini and Tomas Dirrix of Studio Ossidiana.

Features such as surrounding walls, central fountains, kiosks, and doorways to the gardens were all created as tactile concrete forms.

Different pigments, stones, sand and cement were used to produce the series of multicoloured pieces – each referencing the contours, tones and shades that Studio Ossidiana imagined of the gardens. 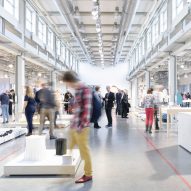 "The objects expose the lively and bright character of a material that has, in the building industries, progressively lost its expressive potential," said the studio.

Petrified Carpets is part of an exhibition named In No Particular Order, which showcases graduate designers, researchers and makers from the fields of architecture, design, fashion, and graphics.

The exhibition is taking place as part of this year's Dutch Design Week, which runs from 22 to 30 October 2016.

Photography is by Kyoungtae Kim.