A design for "the most Instagrammable billboard in the world" by a Los Angeles team has beaten schemes by Zaha Hadid Architects and Gensler in a competition to create an advertising structure for Sunset Boulevard.

Chosen by the city council for West Hollywood earlier this week, Tom Wiscombe Architecture's billboard will be installed as a pilot project for a city-owned plaza along the famous thoroughfare.

"Sunset Boulevard has played a distinct role in the evolution of the billboard, particularly in the 1960s and 1970s, with edgy content, protruding elements, and promotional appearances by music stars," said Tom Wiscombe Architecture. "Our proposal aims to build on this legacy in a contemporary way."

Called the West Hollywood Belltower, the three-sided vertical structure will display advertising content, artwork and interactive features accessible to observers with mobile phones. It also can be used as a live-feed backdrop in the landscaped public square, which features steps that double as seating.

The exterior of the structure will be sheathed in perforated metal panels that will be embedded with LED technology, video screens and theatrical lighting.

The structure's vertical orientation stands in contrast to the flat, horizontal billboards that currently line the Sunset Strip.

"It avoids the 'sign-on-a-stick' billboard typology in favour of something spatial and interactive," the architect said. "It operates on the level of deep urban archetypes, such as ancient bell-towers, clock-towers and obelisks, which are associated with civic space and community engagement."

The design also speaks to the ongoing hybridisation of content and the idea that "media is no longer a just a way of advertising but a way of life", the architect added.

The interior will contain a sculptural object that is programmed with both social media and interactive content. While visible to passing drivers, the object is primarily intended to engage pedestrians.

"Pedestrians can interact with it directly via apps on their smartphones, altering patterns of light pulled from the deep web, or 'pushing' digitally altered media content onto it," the firm said.

The project will exist in two realms: the local physical space of Sunset Strip and the global digital space of social media. "Potentially the most Instagrammable billboard in the world, this project will actively share the uniqueness and creativity of West Hollywood with the world," the architect said. 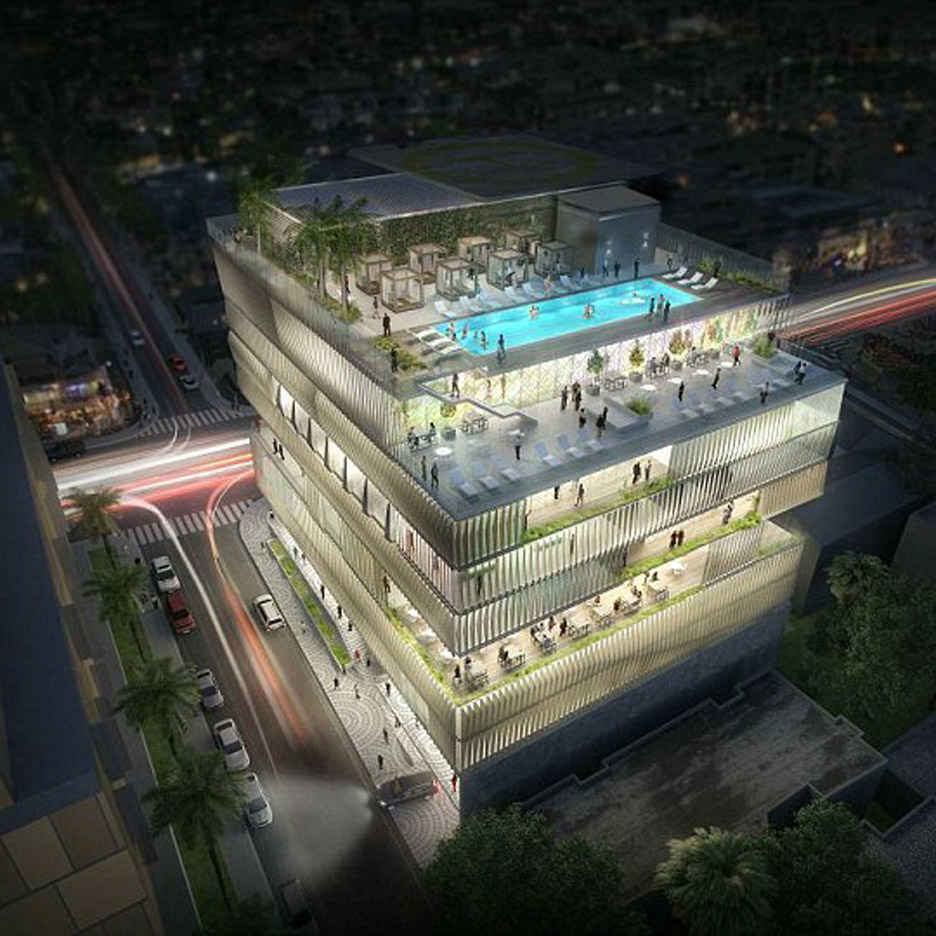 The team beat out proposals from nine other teams, including groups led by Zaha Hadid Architects and Gensler.

Other recent projects in Los Angeles include an automotive museum by KPF wrapped in ribbons of metal and a OMA's design for the new FAB Park in the downtown district.