Pedrali is showcasing – among other products – sound-absorbing panels, a modular sofa and two armchairs as part of its furniture collection aimed at contemporary offices and co-working spaces.

"Office furniture latest trends envisage the improvement of comfort and the conditions, which enable people to work better and to be more creative in a collaborative and sharing atmosphere," explained Pedrali.

Pedrali products are on display at Orgatec in a specially designed space by Milan-based studio Calvi Brambilla in Hall 9, Stand B041–A040 from 25 to 29 October 2016.

In keeping with the trend for products that make interiors quieter, Marcello Ziliani has created Snooze – a range of sound-absorbing panels for walls and ceilings to soften acoustics in open-plan spaces.

Snooze panels are available in different colours or fabrics so that they can be can be easily combined with other pieces of furniture. They feature removable covers to make them easy to clean.

Also on display are updates to Pedrali's Social sofa and Vic armchair. Designer Patrick Jouin has added two curvy modules and a turning tablet to the Social sofa – a modular system that can be adjusted to suit different styles of working.

French designer Patrick Norguet has updated his Vic armchair to include a version with a steel leg. The chair features a gap between the backrest and seat that allows for easy handling, and can be upholstered in fabric or leather.

The Babila chair by Italian designer Odo Fioravanti is also on display. It features a slim plywood seat and solid ash legs that are also available in steel – either individually or as sled frames.

Calvi Brambilla designed Pedrali's stand for this year's Orgatec event. It is made up of a series of settings connected to the working environment, including a meeting room, a break-out area, a conference room, a company restaurant and a waiting area.

The furniture display is accompanied by visuals that interpret the furniture collection "in an ironic and surreal, almost dreamlike viewpoint".

This includes a short clip of a shark that passes behind a window of a waiting area, as well as models of three little boats placed on the snow-white top of a table in a meeting room. 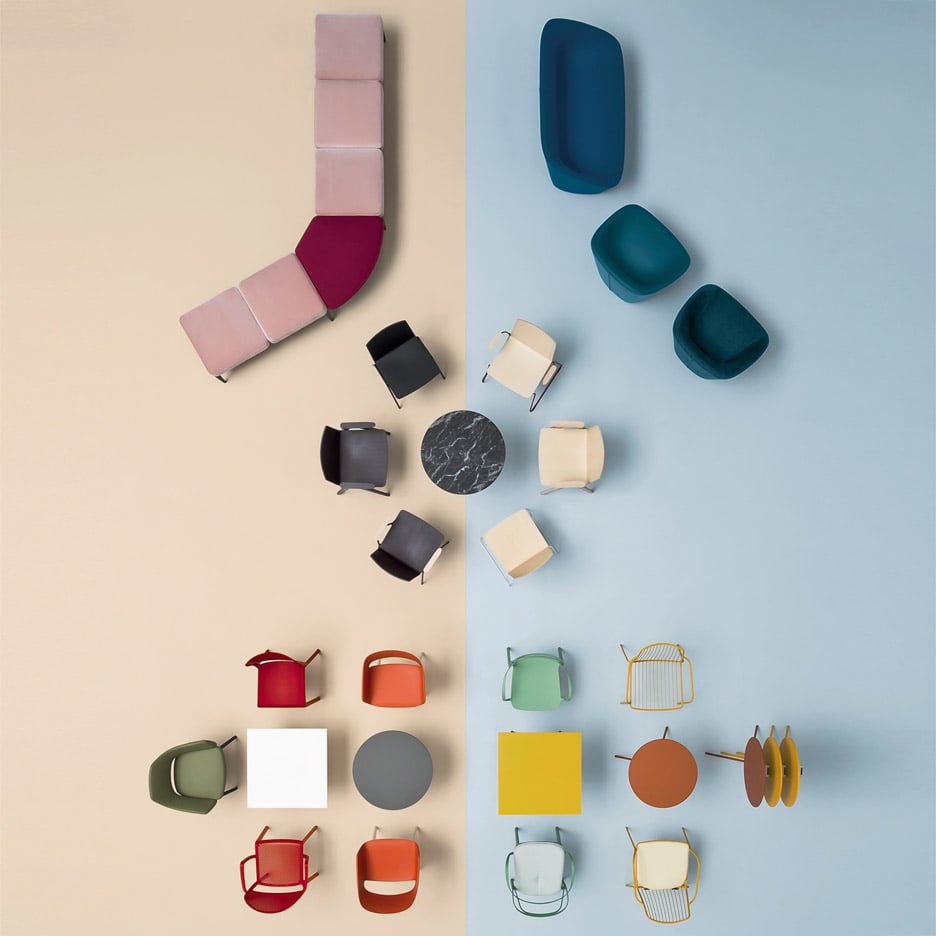