A slender swimming pool runs along one side of this concrete house in western Austria by Marte.Marte Architects, offering bathers views towards the Rhine Valley.

Feldkirch-based practice Marte.Marte Architects designed the concrete house and pool for a sloped site overlooking the valley, which lies between the Austrian state of Vorarlberg and the Swiss canton of St Gallen.

The architects named the residence House of Yards after the four courtyards it carved out of the concrete volume. These help to bring light into the two storey property, which is partially embedded in the slope.

The swimming pool and deck occupy the largest of these patios – a cutout located on the property's upper level. A band of concrete stretches across the open side of the courtyard, framing the view of the valley.

A further patio set behind large metal doors contains a flight of concrete steps that lead down to the front door. Two smaller slits in the plan are filled with gravel and planting, completing the house's four courtyards.

"Four courtyards bring additional light deep into the house and give the project its name," explained the architects. "The biggest one holds a pool and is, so to speak, the sun deck."

The main living areas are arranged in a U-shape, wrapping around the pool deck with large expanses of glazing. The roof slightly overhangs on one side to create a covered outdoor area.

Two windows join the opening on this mountain-facing side, and a further pair of windows cut through the northern facade. The walls that make up the east and south facades of the house have no windows at all.

The windows are either surrounded by thick concrete frames on the exterior of the building, or set deep into the facade and have wooden frames. 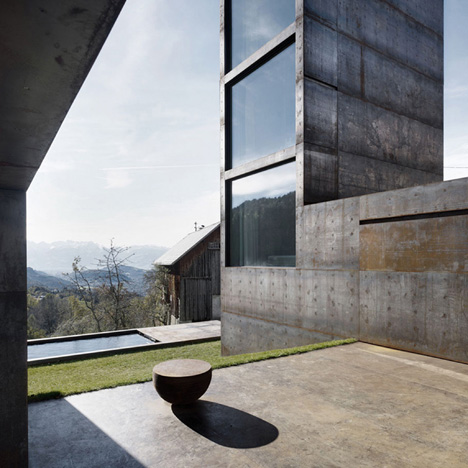 "Due to two closed facades it has a hermetical appearance from the street," said the architects. "The two other sides open up to the landscape."

"Two frameless windows and two breakthroughs interrupt the facade to draw the view over the valley as far as the Swiss mountains."

The concrete structure remains exposed inside the residence. It also forms a large chimney breast for the fire at the centre of the upper floor, which divides the kitchen from the lounge.

Timber panelling lines some of the walls and floors, as well as the cabinets and central island in the kitchen.

The master bedroom, also on this level, has an oval-shaped bathtub encased in a glass box.

House of Yards is one of a number of residences completed by Marte.Marte Architects in Austria.

Others include a steel-clad extension inspired by the towering fortress of fairy tale character Rapunzel and an Alpine holiday home made from coarse concrete that gives its walls a rocky texture.

Photography is by Marc Lins.