A new sportswear brand is making garments with panels of woven fabric that mimic the effects of pain-relieving kinesiology tape.

The tape — also known as KT Tape and sports tape – is usually stuck over injury-prone or rehabilitating areas of the body, where it is supposed to provide support, stability and pain relief.

Python Performance's activewear integrate strips of sticky fabric that act in a similar way, pulling the skin and fascia away from the muscle in some areas, while compressing others.

Launched on Kickstarter today, the Contour Compression collection features tops and leggings. They are described by Python Performance CEO Oscar Ryndziewicz as "the closest one can get to actual tape", which usually needs to be applied by an expert.

The company claims to have had positive feedback from an extensive period of testing with athletes and sports scientists.

"What we have developed is not currently available elsewhere," Ryndziewicz told Dezeen. "From those who have already tried our clothing we hear that, comparative to training without our garments, they are able to warm up quicker and feel overall more supported."

"In fact, not a single person who has put on our Contour Compression clothing has felt anything other than positive benefits to their performance, warm-up and the feeling of support," he said.

Python Performance worked with sportswear designers – including a former Speedo and compression-wear designer – and exercise physiologists at the University of Birmingham to develop the garments.

While other companies have previously applied kinesiology principles to sportswear design, Python Performance's are distinguished by Lycra-backed strips of fabric that grip the skin as tape would, rather than sliding over it.

The strip placement and width has been developed to work on most body shapes. Ryndziewicz believes the garments are suited to both professional athletes who need to supplement their rehabilitation programmes and occasional exercisers who would otherwise be unlikely to use sports tape.

"Putting on kinesiology tape requires a real knowledge of anatomy and takes far longer than putting on compression wear," said Ryndziewicz. "Our garments mean wearers can be ready to go in no time." 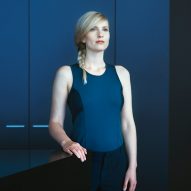 Python Performance's garments represent one new innovation in the rapidly evolving field of activewear. While big brands like Nike and Adidas dominate the market, new ideas have also come from independent designers like Pauline van Dongen, who created experimental athletics apparel from the same material that contraceptives brand Skyn uses to make its condoms.