Japanese design studio Nendo has proposed a range of circular whiteboards that can be easily wheeled around the office to encourage creativity.

The conceptual office range, which was made for Japanese furniture manufacturer Kokuyo for the the 2016 Orgatec trade fair, features large round partitions that double as noticeboards or whiteboards.

Slots in tables, benches, counters and the floor allow the screens to be held in place, while their shape lets them be rolled across the room as needed.

The slits also provide room for workers to store their bikes – meaning they can be wheeled through the office and stored by desks.

Smaller versions of the screens sit on tables to support laptops or provide privacy – with the fabric-covered side absorbing sound – while large partitions can be used to divide workstations or create "rooms".

Nendo hopes this freedom of movement will encourage workers' creativity, persuading them to think differently.

"It was hoped the shape will encourage people to jot down their ideas not in a linear form but chained in a spiral form or spread out in a radial form," said the studio, which recently unveiled its biggest project to date, a shopping centre in Bangkok.

"The aim was to achieve a dynamic work space that would enhance the "rotation" of the brain coupled with the rolling whiteboard."

Nendo was not alone in presenting conceptual furniture at Orgatec, which is focused on office design. Ronan and Erwan Bouroullec exhibited a proposed furniture range for Vitra that aims to bring the atmosphere of home into the office.

New products came from Note Design, whose roll-up dividers are tailored towards nomadic workers, and Tom Dixon, who revealed his first office range. 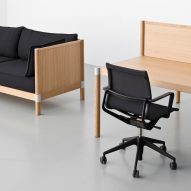