Movie: Oki Sato of Nendo explains the concept behind the Japanese studio's redesign of a 40,000-square-metre shopping mall, in this video Dezeen filmed in Bangkok for retail development company Siam Piwat.

Located on Bangkok's Rama 1 thoroughfare, Siam Discovery is an 18-year-old shopping centre operated by Thai company Siam Piwat. The mall reopened in May this year after a complete interior and exterior refurbishment overseen by Nendo.

At 40,000-square-metres across seven floors, Siam Discovery is Nendo's largest project to date.

However, Sato says that his overall design approach does not change much, whatever the size of the project.

"This is definitely the biggest project that we have ever done," he reveals in the movie. 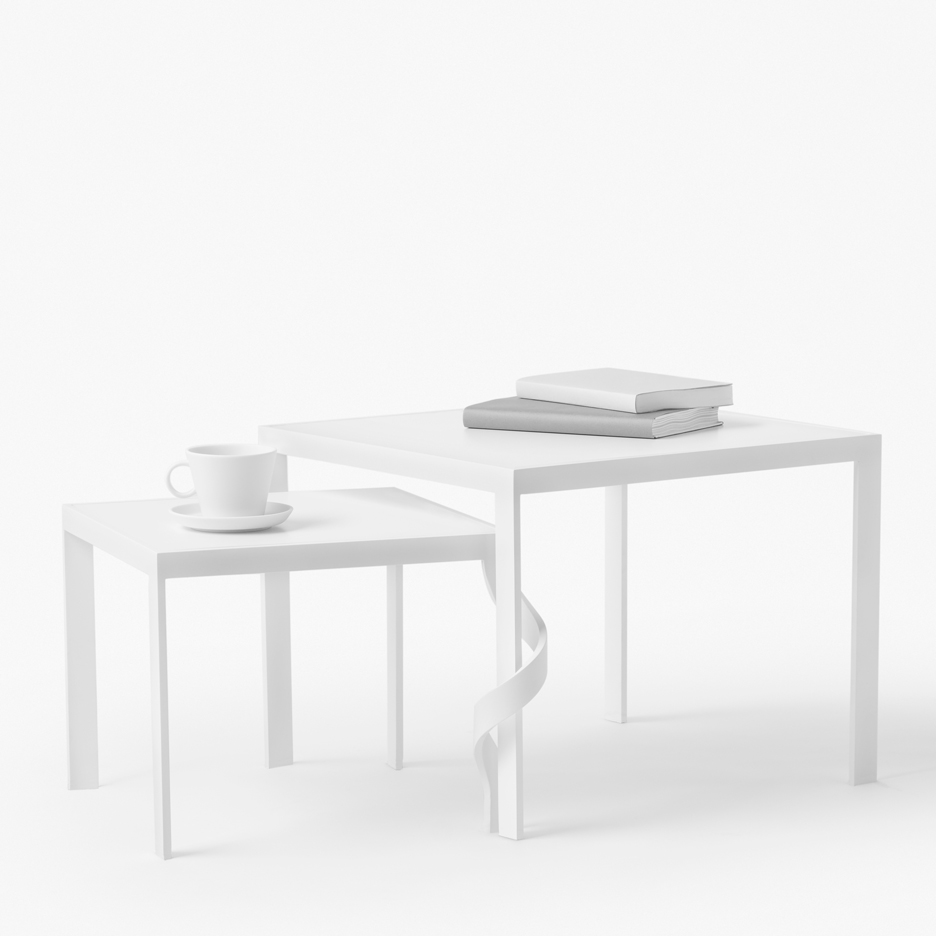 Nendo's Tangle side tables entwine together "as if holding hands"

"But it really doesn't make a big difference to me whether I design small packaging for chewing gum or this huge retail store. It's always about giving small smiles to people in the end."

Sato says one of his main aims for the project was to open up a series of small circular voids in the original mall to create a much larger central atrium.

"When people walk in, I wanted them to look upwards and look through the space," he explains. "In the beginning there were small voids, but we tried to connect them as much as possible so the atrium becomes more like a canyon. It's almost 60 metres wide."

One side of the atrium features a four-storey stack of 220 black and silver boxes containing video monitors, digital signage and merchandise displays, which is designed to function as a directory of what's going on in the mall.

"This wall stacked up with cubes is used like an index," Sato explains. "People can understand what's happening here in the space."

The box motif also recurs on the exterior of the building, which features a double-skin glass facade.

"In Bangkok there's a lot of strong sunlight coming in, so we needed a screen," Sato explains. "We had squares printed in two layers [on the glass]. You feel the depth and get a sense of the cubes in the atrium."

Sato describes Siam Discovery as "a hybrid of a department store and a shopping mall". It features a number of traditional concessions as well as 13 curated retail areas with products arranged thematically.

This approach to retail was conceived by Siam Piwat CEO, Chadatip Chutrakul.

"Instead of presenting products by brand, we present them by storytelling," she says. "Each place in this building has its own story."

Nendo designed each of the 13 individual themed retail points, which are united by Chutrakul's overall concept of creating a "lifestyle laboratory".

"We're not only selling products here," Sato says. "It's about experience, about inspiration and the chemical reaction."

The ladies' fashion area on the ground floor features 20 different pieces of furniture and display pedestals based on scientific diagrams, while the men's fashion zone features flasks and other lab equipment as well as shoe displays based on the double-helix structure of DNA molecules.

Other areas include Street Lab, which sells sportswear, as well as a space for electronics called Digital Lab, which features huge microscope-shaped displays illuminated by integrated lighting.

Previously, Nendo has designed everything from a transparent plastic rocking horse to a line of T-shirts featuring versions of the Hello Kitty character reinterpreted for a male audience.

Chutrakul says that she only ever had one person in mind to refurbish Siam Discovery.

"I have been a big fan of Nendo for many years, especially Oki Sato." "So when I thought about this new concept, I knew it was only him I should work with."

This movie was filmed by Dezeen in Bangkok, Thailand, for Siam Piwat. Photographs used in this story are by Takumi Ota, unless otherwise stated.