Hyperloop One has released a new teaser video revealing that its new high-speed transportation system designed by Danish firm BIG will connect Dubai and Abu Dhabi in just 12 minutes.

The video, released today ahead of the official unveiling of the plans on 8 November 2016, shows the Hyperloop linking Dubai with key cities across the United Arab Emirates in just a matter of minutes.

The capital city Abu Dhabi – located over 150 kilometres away – is reached in 12 minutes, Riyadh in 48 minutes, Doha in 23 minutes and Muscat in 27 minutes.

Air-cushioned pods transport both passengers and cargo in capsules travelling at speeds of up to 1,100 kilometres per hour. The pods are pushed through a network of semi-vacuumed tubes using both levitation and propulsion mechanisms.

In an exclusive preview sent to Dezeen last month, BIG partner Jakob Lange discussed how the firm's plans for the Hyperloop will transform how people live, giving them greater choice over where they live and work. 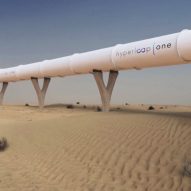 Lange, who is director of an experimental arm of the firm called BIG Ideas, is heading up the team developing the "grand vision" for Hyperloop.

Musk first unveiled the concept for a Hyperloop in 2013 but later open-sourced the technology and is no longer directly involved in its development.

Hyperloop One is among of a handful of companies vying to be the first to build Hyperloop. The company appointed BIG alongside architecture and engineering firms AECOM and Arup to realise the concept.

Hyperloop One carried out testing of its propulsion technology for Hyperloop near Las Vegas earlier this year, where it achieved speeds of 187 kilometres per hour in 1.1 seconds.

The company's main competitor is Hyperloop Transportation Technologies, which is currently building a test track in California and is already in discussions to build a Hyperloop between the European cities of Budapest, Vienna and Bratislava.