Architecture studio MAD has designed a concept for a nature-friendly hyperloop network with raised green walkways alongside tubes topped with a solar panel skin.

MAD designed the solar-powered system for HyperloopTT, one of the two main companies working to build a near-supersonic transportation system.

The proposed design, which also acts as a public space and walkway, aims to demonstrate how "the artificial can merge with nature".

In cities, MAD envisions the transportation system would help connect people to nature by incorporating raised, car-free walkways filled with greenery, while parks and recreation areas would be positioned on the ground below.

The transportation tubes would be covered with bendable solar panel modules that would be used to power the hyperloop itself, as well as a series of LEDs installed along its surface that function as interactive information boards.

Bladeless wind turbines intermittently positioned alongside the system would also act as a source of power for the network, lowering overall energy costs.

HyperloopTT tasked MAD with creating a versatile pylon design that would be a structural support for the tubes and could easily be installed across diverse environments, from city centres to farmlands and remote deserts.

Composed of a single-mold fibreglass structure, the pylon supports would lessen the network's physical footprint by raising its functions almost seven meters above the ground, which also eliminates any possible collisions with road traffic. 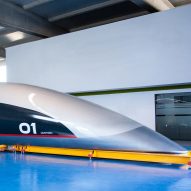 MAD imagines the base of each pylon to host crop-growing facilities in a bid to encourage urban farming.

Light energy harnessed from the solar-powered LEDs embedded into the hyperloop surface would enable the plants to be self-sufficient, forming a "friendly" and "truly organic" infrastructure.

Conceived by Elon Musk in 2013, the hyperloop systems are designed to project pods at near-supersonic speeds through partially depressurised tubes, as a high-speed public transport alternative to trains and planes.

While hyperloop networks have been proposed for many locations across the globe including the US, Mexico and central Europe. HyperloopTT has already made agreements with China, Ukraine and UAE regarding branches, meaning the capsule prototype could operate in any of these locations.

In August this year, the government of the Indian state of Maharashtra approved Virgin Hyperloop One's plans to develop what could be the world's first hyperloop line connecting the two cities of Mumbai and Pune, which are around 100 miles apart, in 35 minutes.

HyperloopTT revealed what the passenger capsules of the lines may look like last year, when it unveiled a full-scale prototype designed by Priestmangoode, which was built using the newly developed material Vibranium.