The studio announced that it will be collaborating with Hyperloop Italia to design the "next phase of works" for a planned near-supersonic network in the country.

"We are looking forward to collaborating with Hyperloop Italia; marrying transformative architecture, engineering and urban planning with the most efficient and sustainable transport network to significantly improve accessibility, connectivity, and well-being in our cities," said Zaha Hadid Architects principal Patrik Schumacher.

"We share Hyperloops Italia's multidisciplinary approach which combines innovations in design and operational technologies with advances in ecologically sound materials and construction practices; enabling us to deliver future-resilient projects that are inventive, structurally efficient and environmentally sustainable."

Hyperloop was first proposed in 2012 by SpaceX and Tesla founder Elon Musk. The high-speed transportation system would consist of a series of low-pressure tubes that pods would be propelled through.

The technology is now being developed by several companies including HyperloopTT, which has licenced its technology to Hyperloop Italia for use in Italy.

Hyperloop Italia is currently carrying out a feasibility study on a proposed route between Milan and the Malpensa Airport, which would reduce travel time from 43 minutes to 10 minutes. 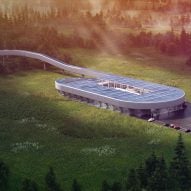 The planned network in Italy would be powered entirely by renewable energy sources and will be capable of producing more energy than it consumes.

"We are committed to building the most accessible, convenient and safest transportation system in the world using the new generation of environmentally friendly materials with a high recycled content." Hyperloop networks are being developed in numerous countries around the world. In 2019, architecture studio MAD revealed its designs for a solar-powered system for HyperloopTT, while India approved Virgin Hyperloop One's plans to develop a high-speed line between Mumbai and Pune, connecting the cities which are 100 miles apart in just 35 minutes.