British automotive company Charge has unveiled its vision for the "future of electric trucks", with an autonomous vehicle that can be assembled in four hours.

The Charge truck was unveiled at the Wired 2016 conference last week as an alternative to lorries that are currently on the road.

Finding these existing trucks "totally unacceptable", the company aimed to create a more affordable model that was both safer and better for the environment.

"We find trucks today totally unacceptable," said the company's CEO Denis Sverdlov. "We are removing all the barriers to entry for electric vehicles by pricing them in line with conventional trucks."

The vehicles are built from ultra-lightweight composite materials and custom-built hardware, including the electronics and motors.

The company claims this alone will reduce operation costs by more than 50 per cent. It says the truck will be so easy to assemble that one person can do it in four hours.

"In an industry which is driven by price and weight, this will help to transform the highly complex logistics sector," it said. "The design simplicity is reflected in the ease of assembly." 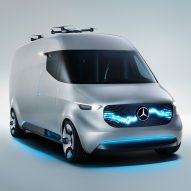 All vehicles are capable of driving autonomously. They receive over-the-air updates like a smartphone would.

The trucks are emission-free for the first 100 miles (160 kilometres) of the journey, but for longer journeys a dual mode can be used to extend the range to 500 miles (805 kilometres).

The company is planning to open its first factory in 2017 near its current headquarters in Oxfordshire, England. Sverdlov expects the vehicles to be on the road soon after.

While it's an important step in the race towards electric vehicles, Charge isn't the first company to propose an alternative truck "of the future".

Earlier this year, Mercedes-Benz unveiled its own plans for a "van of the future" that features fully automated cargo loading and drones that drop off packages.