IKEA has worked with the Red Cross to build a replica of a real Syrian home inside its Norwegian flagship store.

The 25 Square Metres of Syria apartment is based on that of a refugee woman named Rana, a mother of four young children who all live in a tiny two-bedroom apartment in Damascus.

Designed with the input of creative agency Pol, the apartment is unlike the other display rooms in the store and is built from rough concrete blocks.

Instead of the typical aspirational interior laden with IKEA products, it is intended to give customers a realistic glimpse of what life is like in the war-torn country.

"We had been working with the Red Cross for months, so we had a lot of footage from Syria," said Pol. "But no matter how emotional it was, nothing got close to the experience of visiting people in a war zone."

"We realised we could give Norwegians that experience at IKEA. At the one place where you think of and plan the future — the apartment served as a physical reminder of how lucky we are."

Instead of sofas are a few scattered rugs, while beds are made from thin sponge mats and old blankets.

IKEA's iconic price tags were used to tell short stories of refugees all across Syria and to give information on how to donate to Red Cross.

"Norwegian Red Cross had visited Rana and filmed her home, so we knew what conditions it was in," said Pol. "The whole family shares a few mattresses and she only has plastic to cover the windows."

The most difficult thing about creating the apartment was building the heavy concrete walls. But this was an integral part of the design being as "close to reality" as it could be.

"It would have been easier to just put up wallpaper, but it wouldn't have felt the same," said the team. "We wanted the apartment to be as close to reality as we could."

This isn't the first time IKEA has offered its services to the ongoing refugee crisis. Best-known for its extensive range of ready-to-assemble furniture, the company launched a flat-pack emergency shelter back in 2013 as an alternative to the tents often used to house displaced people.

Thousands of Better Shelter cabins have since been deployed globally, with many being used for functions other than housing, or grouped together to create larger structures.

"It is a real opportunity," IKEA Foundation CEO Per Heggenes told Dezeen. "Because they are modularised, they offer a way of creating small health stations, as doctors did in Nepal, or creating temporary schools." 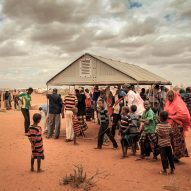