Danish firm Bjarke Ingels Group has teamed up with French studio Silvio d'Ascia Architecture to design a loop-shaped station for a new stretch of the Paris Metro.

BIG and Silvio d'Ascia Architecture designed the Pont de Bondy station as part of the Grand Paris Express, a new set of lines that will extend the city's existing metro system by 200 kilometres.

One section of the terracotta-coloured building is shown surrounding a covered concourse, while two wings extend out from it at right angles. The first passes under a flyover and the second stretches across a pool of water.

Pont de Bondy station will be located on Line 15, a suburban ring route that will surround the periphery of Paris.

This 75-kilometre stretch of track will be divided into three branches – Line 15 South, Line 15 West and Line 15 East – and each of its stations will connect with another mode of transport.

Pont de Bondy is one of nine "emblematic stations" that will be spread across the network. Others include Kengo Kuma's Gare Saint-Denis Pleyel and Miralles Tagliabue and Elizabeth de Portzamparc's Le Bourget station. 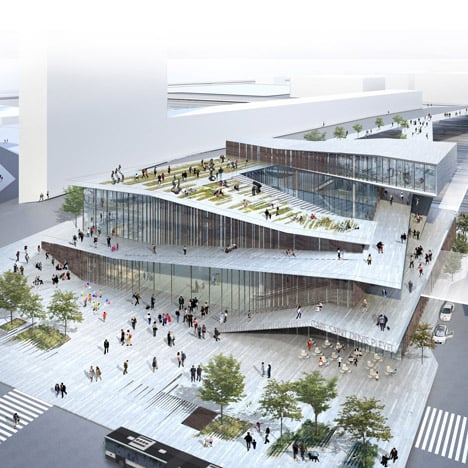 Six further architects have also just been named as the designers of 10 stations on Line 15.

London firm Grimshaw will design the Marie d'Aubervilliers and Fort d'Aubervilliers stations, while Parisian studio Bordas + Peiro will be responsible for the Stade de France station. 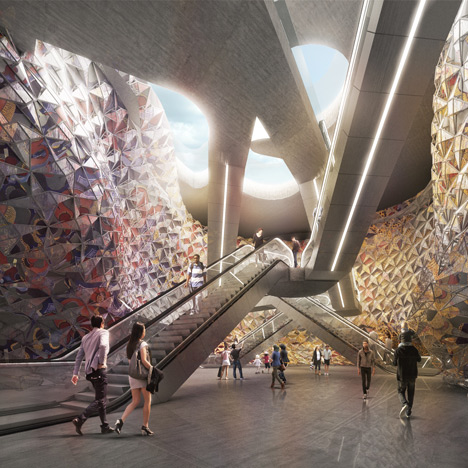 There are now 37 teams of architects working on the 68 new stations for the Grand Paris Express.

Three remaining stations are yet to be assigned to architects: Rosny-sous-Bois, and Orly and Charles de Gaulle airports.

All stations and lines of the Grand Paris Express are expected to open before 2030.