Protruding bricks texture the walls of this extension to an early 20th-century house in north London, which was designed by Pamphilon Architects for a fashion designer client.

The east London studio added the brick extension to the rear of the terraced house in the borough of Harringay, expanding its small existing kitchen.

The studio named the project Lacy Brick after the arrangement of protruding and receding red bricks used to form the extension's outer walls.

"This is a quirky house, an Edwardian terrace that has been sliced off at an angle by the adjoining road, resulting in an unusual internal layout and small kitchen that is rather out of balance with the rest of the house," said architect Anna Pamphilon.

"We felt that a brick addition would be the most sensitive to the original building, and knew that we wanted a red brick to compliment the existing red brick headers above the patio doors and red bricks of the chimney and side elevations," she added.

The studio worked closely with the client to determine the brickwork pattern, as well as the interior finishes, which feature accents of bright colour including acid-yellow cabinets and monochrome flooring.

"The client is a fashion designer and has a love of texture, colour and fun which we wanted to convey within the project," said the architect.

"Having chosen to keep the extension compact we wanted the extension to be as jewel-like as possible whilst being very careful with the budget which was tight," she added.

"After exploring many styles we decided upon laying the bricks in a flemish bond with protruding headers creating what we referred to together as a 'lacy brick' pattern."

A set of glass doors with oak frames connects the extension to the garden, while a window with an integrated seat and a skylight offer plenty of natural lighting.

Under the brickwork, the extension's timber frame has been left exposed. The ceiling beams are used to hang a row of pendant light fittings on coloured flexes.

Single-storey extensions are a popular way of maximising restricted space in inner-city London.

Other examples in north London include a limewashed brick addition and an extension featuring black gridded glazing. 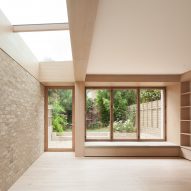 Photography is by Anna Pamphhilon unless otherwise stated.