The Design Museum's new £83-million London home by John Pawson and OMA is set to open next week at the former Commonwealth Institute building in Kensington.

Architectural designer John Pawson was responsible for the building's newly reconfigured interiors, where the Design Museum's galleries are arranged around a minimal oak- and marble-lined atrium. Pawson also created a standalone shop for the museum.

The new Design Museum will open to the public on 24 November 2016 but held its press preview today and a friends-and-family day offering a first glimpse inside the building last weekend.

"I think its marvellous to have been able to save the building, and have it now as what's going to be a world-class centre for design," said Pawson during the press preview.

"Having decided that we wanted to keep that extraordinary atrium, [the aim] was for it to make a building that was really wonderful for people as well as objects."

"All the floor structure of the building is new, so there was an extraordinary temporary structure holding up this roof while the old structure was knocked out to create the new building," added Chris Masson of Pawson's studio. "It was quite a feat of engineering."

Structural work completed on the building earlier this year, alongside three flanking housing blocks designed by OMA with Allies and Morrison to help fund the transformation of the Commonwealth Institute.

Two basement levels were excavated below the footprint of the original 1960s building, increasing its floor plan from 6,000 square metres to 10,000 square metres – triple the space available at the museum's former Shad Thames location in southeast London.

"We kept the roof and largely rebuilt the building underneath," explained Renier de Graaf of OMA.

"The structure of the building beforehand was not capable of supporting any kind of meaningful modern function," added a spokesperson for OMA. "The floors themselves were very cheaply built in the 1960s, but what was the star of the show was the roof."

The floors are connected by flights of wooden steps, which are surrounded by tall balustrades and double as impromptu seating. Hanging rails are integrated into the wood-lined walkways surrounding the atrium, giving the museum the opportunity to use the circulation space as an extra exhibition area.

Floors throughout are covered in pale grey terrazzo, and the underside of the building's impressive roof form is left exposed.

Subterranean levels host storage rooms, back-of-house facilities and an auditorium, while a temporary exhibition space is located off the atrium at ground level. The opening exhibition, Fear and Love, is organised by the Design Museum's chief curator Justin McGuirk.

The museum's library is located on the first floor, alongside the archives of designer Robin Day and an education space sponsored by the Swarovski Foundation.

The top floor is home to the museum's permanent collection, where displays are designed by Studio Myerscough. This floor also has a restaurant and members' room designed by Edward Barber and Jay Osgerby's practice Universal Design Studio.

The restaurant gives diners views out over Holland Park on one side and down into the atrium through internal windows on the other. The interior is finished with furniture made from blue-stained ash wood.

"Our goal was to complement Pawson's design, while contributing to the overall visitor experience, one that creates a fluid transition from day to night within the space," said Universal Design Studio director Hannah Carter Owers.

The members' room, which also faces onto Holland Park, features a more restrained colour palette. Here, there is a polished-pewter bar and a mirror clad wall. Both spaces are furnished with pieces from Barber and Osgerby's collections for Vitra.

For job opportunities at the Design Museum, visit their company profile on Dezeen Jobs.

Photography is by Luke Hayes unless otherwise stated. 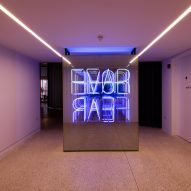