Thai-American fashion designer Thakoon Panichgul opened the store for his eponymous label in August 2016, following the launch of an e-commerce platform.

The two moves marked a shift in the brand's business model, from wholesale to a direct-to-consumer stance.

To design the interior of the physical space on Wooster Street, Panichgul enlisted his friend of 10 years, Giancarlo Valle of New York-based SHoP Architects.

As part of the restoration of a historic cast-iron building, the team overhauled the 2,500-square-foot (232-square-metre) ground floor and added nearly floor-to-ceiling glazing to the street facade.

"In keeping with Thakoon's business structure, the store is a break from retail precedents, and an intentional reduction of visual anxieties commonly found in retail design," said Valle.

"We played with deceptively simple materials, and with each, we began to understand the inherent qualities and alter them in unexpected ways, mirroring the process Thakoon undergoes in his collection development."

Among these materials is concrete, which has been used to create curved walls, counters and fitting rooms.

Brooklyn artist and designer Fernando Mastrangelo cast the concrete in-situ in small layers, creating a striated effect similar to that of his furniture range, launched earlier this year.

In contrast, portions of the space are clad in raw American white oak, laid to create undulating surfaces.

"We were attracted to the white oak because of its natural qualities and beautiful imperfections," said Valle.

His globe- and tube-shaped lights are mounted on brass, matching clothes rails and mirror frames around the store. Woven leather seats dotted around the space were created by Brooklyn studio Vonnegut/Kraft.

"It was important the space have what I feel is a distinctly American sensibility, which has always resonated with me: cool, youthful, effortless and, above all, authentic," said Panichgul. 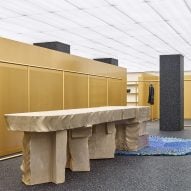 SoHo is home to many high-end fashion boutiques and furniture showrooms, including Tom Dixon, as well as a series of new residential towers designed by the likes of Renzo Piano and Karim Rashid.