Cun-Design was asked to oversee the refurbishment of the existing property in the Chinese capital's Tongzhou District to create a new workspace for Blue Moon Films.

The detached house located on the bank of the Wen-Yu River in the east of the city was only built in the 1990s, but had already fallen into a state of disrepair.

The architects recognised that the house's facades and structural framework could be retained and adapted, but sought to completely transform the cramped interior to give it a more modern feel.

"Our first impression on this house is that it is out of tune with today's people and their way of living," said Cun-Design. "We maintained its original structure during the renovation and formed a contrasting boundary between old and new within the project."

The refurbishment began with the removal of all non-structural internal walls, resulting in more open and flexible spaces. Doors and windows were also removed to create uninterrupted circulation throughout the building. 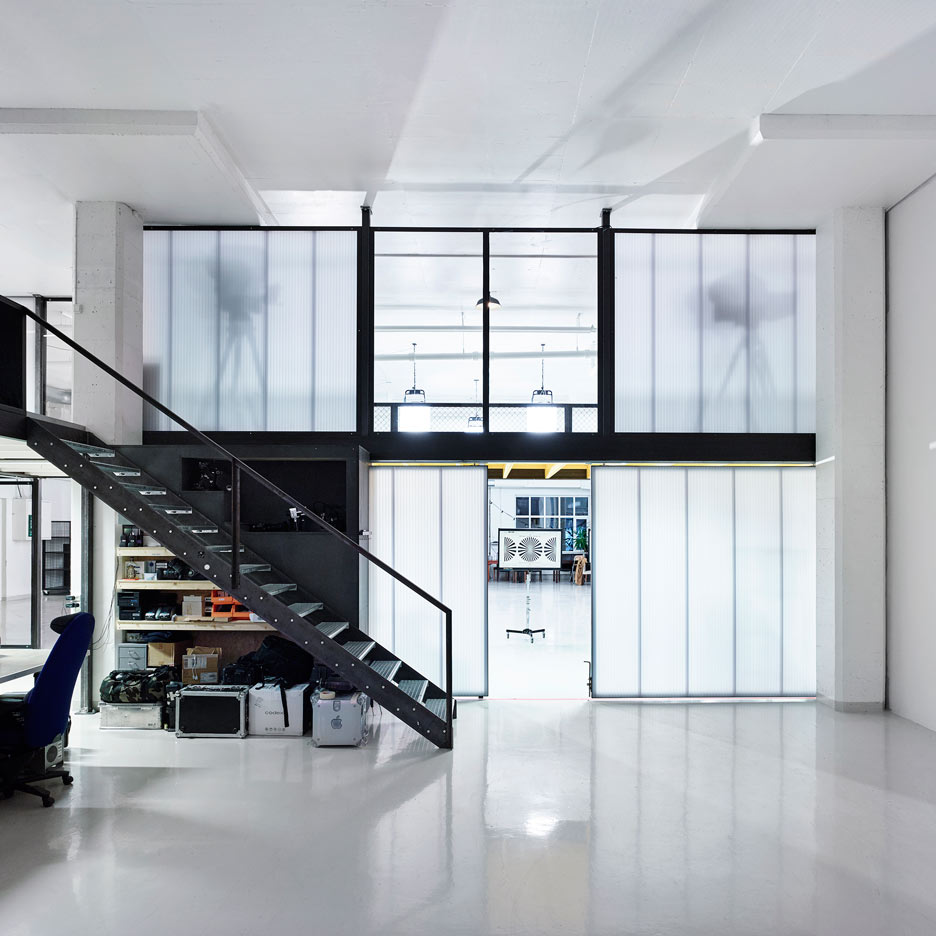 "We believe that an 'empty' space is not empty and lacking character," said the architects. "On the contrary, it makes it possible for us to illustrate this space more truly and clearly, and to avoid getting a space with unnecessary design elements."

One of the key concerns of the design was to enhance the connection between indoors and outdoors. This is achieved through the addition of new extensions, including a glazed volume that wraps around the side and rear of the building.

The pre-weathered steel extension at the front functions as a sheltered porch containing the main entrance. This leads into a lounge area with tables and seating on one side.

On the other side of the entrance, an exposed tear in the original brick wall creates an opening that leads to a corridor extending towards the rear of the building.

Lining the corridor is a contemplative reading space wrapped in a screen formed from timber battens and clad in plastic, which allows diffused light and a view of the garden to reach the interior.

The house's original stairs were removed and replaced by a new staircase accommodated within the glass box that projects from the side of the building.

The double-height void containing the stairs is entirely lined with glazing that fills the space with daylight and creates a strong visual connection with the garden.

The stairs ascend to a hall on the first floor with a doorway to one side leading to the directors' office. Straight ahead through an arched opening in one of the original brick walls is a glass bridge that traverses another void before reaching a central landing.

Open-plan offices on this level look out towards the adjacent trees and are separated from a washroom area by a wooden screen covered with filmmakers' clapperboards.

The building's original structural framework is particularly evident in the bathrooms, where large holes accommodate sinks placed on a wooden plinth. Mirrors fitted behind the sinks accentuate the voids carved into the brick and concrete surfaces.

Throughout the studio, exposed structural elements and roughly executed alterations to the building's fabric provide traces of its past.

These are deliberately contrasted with new details such as bright orange walls, or emphasised by features including the mirrored cladding used to conceal some of the pillars.

"On the left of the line between time there are original buildings of the 1990s, while on the right are re-designed buildings," said the architects. "A dialogue between old and new is formed."

Photography is by Wang Ting and Wang Jin.