Eli Feiglin of Caesarstone reflects on the quartz surface manufacturer's collaborations with designers including Raw Edges and Jaime Hayón in the latest movie Dezeen produced for the brand.

Founded in 1987, Caesarstone is an international manufacturer of quartz surfaces for countertops, which it produces by combining powdered quartz mineral with a polymer binder.

The company designs all its products in-house but regularly collaborates with external designers. This year, for example, Caesarstone worked with British designer Tom Dixon to create four different kitchens that were showcased in Milan during the Salone del Mobile furniture fair.

"It's important for Caesarstone to work with the world's leading designers, to push the boundaries of what can be done with a product," explains Feiglin, Caesarstone's vice president of marketing, in the movie.

In 2014, Caesarstone worked with German designer Sebastian Herkner to produce a bench and table, which were displayed at Wallpaper magazine's Handmade exhibition in Milan.

Called Skid, the designs were inspired by flat-pack furniture and were assembled by slotting together slabs of Caesarstone's quartz material.

"We wanted to use the flat panels of Caesarstone to create a 3D object," Herkner says. "They create abstract lines, very graphic and simple. And it was also very well handcrafted."

The same year, Caesarstone worked with London design studio Raw Edges to create a huge kitchen inside one of the halls of the Palazzo Clerici in Milan.

Built entirely from Caesarstone's quartz material, the kitchen surface had sections removed for slotting in storage units, appliances and accessories.

"What we wanted to do was to use the Caesarstone surface to bind all the units together," explains Yael Mer of Raw Edges.

"So you have the cabinets, you have the sink, you have places to put the dishes. And everything was united within the surface of Caesarstone."

The following year in Milan, Caesarstone collaborated with London designer Philippe Malouin to create two different installations, which were both displayed at the Palazzo Serbelloni.

The first installation consisted of 20 geometric planters carved in a range of shapes, textures and colours.

"We were lucky enough to have all the Caesarstone we wanted to use and work with," Malouin says.

"And we had every single tool imaginable to transform, cut and sculpt [the planters]."

In the palazzo's grand hall next door, Malouin installed eight sets of swings featuring seats made from Caesarstone, which visitors were invited to play on.

"Every single swing seat was a piece of the new Caesarstone collection in 2015, shown in a way that people could interact with," Malouin says.

This year, Caesarstone worked with Jaime Hayón to make an original artwork for a retrospective of the Spanish designer's work at Israel's Design Museum Holon.

Called Face Mirror, Hayón's artwork comprised panels of Caesarstone cut and assembled into an abstract representation of the face of a monkey, with mirrors in the place of eyes.

Hayón says it was important for him to create something artistic from the material, which usually has an industrial use.

"It's not a kitchen, it's not a bathroom – it's art," he says. "So we give [the material] another context and another value." 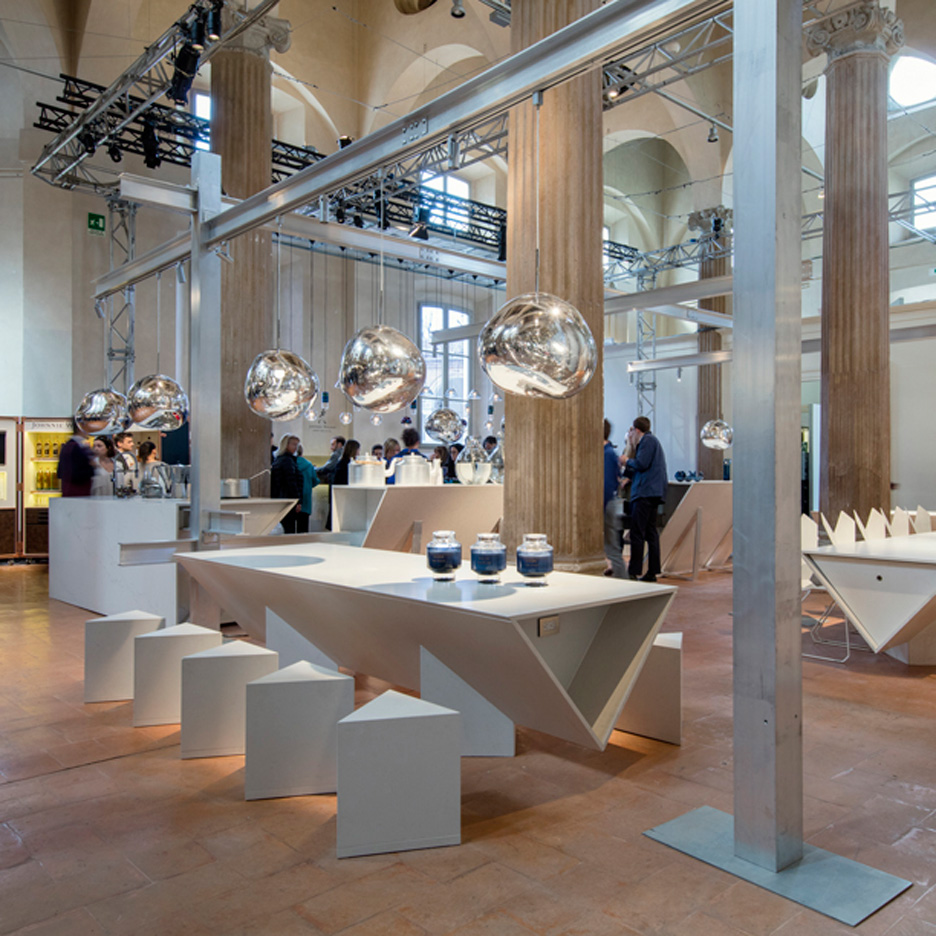 This movie was filmed by Dezeen in Milan for Caesarstone. Photographs and additional footage are courtesy of Caesarstone.