Dezeen promotion: design studio Nadadora has created a swivelling lounge chair for Spanish brand Sancal featuring a deep concave seat based on the shell of a tortoise.

Nadadora designed the Tortuga chair, complete with pouf and table, as a comfortable and lightweight addition to Sancal's Futura collection.

The Barcelona studio based the chair on a tortoise shell, which is hard on the outside and soft on the inside.

Perched on a swivel base, the seat features a steel frame that forms its shell-like shape. To create a cosy cocoon for the body, the seat is made from injection-moulded polyurethane covered in quilted memory foam. It is upholstered to make it soft to the touch.

"The first idea was to do something very, very comfortable yet visually light that wasn't a heavy, bulky chair," said Nadadora designer Isaac Pinēra.

"Inspiration was drawn from a tortoise because we wanted something that would hold you like a shell, like a shelter, and yet it is comfortable inside," he continued.

An oversized headrest can also be attached to the top of the chair and is available in different coloured fabrics. The base features ash wood details that can be stained to combine or contrast with the upholstery.

Nadodara also created a pouf and table to accompany the seat in the same style.

"The table feet use the same language as the feet of the chair, in the pouf the same geometry, the cone – in the end it's about creating harmony between the different pieces to create a family of products," Pinēra explained.

Sancal's Futura collection, which was exhibited during this year's Milan design week, is modelled on the set designs of movies such as the 1968 epic 2001: A Space Odyssey. 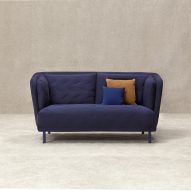 Other pieces in the collection include a quilted sofa designed for afternoon naps and a full-sized armchair and sofa version of its Tonella chair.