Zaha Hadid's closest confidantes have distanced themselves from the speech made by her successor Patrik Schumacher, in which he called for social housing to be scrapped and public space to be privatised.

Rana Hadid, Peter Palumbo and Brian Clarke – the three other trustees of the Zaha Hadid Foundation, and executors of Hadid's estate – said they "totally disagree" with Schumacher's views.

They also claimed that Hadid herself would have opposed the speech, which mapped out the architect's vision for a deregulated and privatised city, with support for foreign investment into property and gentrification.

"The views recently expressed by Patrik Schumacher regarding the closure of art schools, the abandonment of social housing and the building over of Hyde Park are his personal views and are not, in any way, shared by us," said the trio.

"Knowing Dame Zaha as well as we did, we can state categorically that she would have been totally opposed to these views and would have disassociated herself from them. We personally also totally disagree with these views."

Schumacher made the comments during a keynote speech at the World Architecture Festival in Berlin, which was live-streamed by Dezeen and can be watched here in full

Schumacher made the comments during a keynote address at the World Architecture Festival in Berlin, which was attended by hundreds of architects from around the world, and which was first published by Dezeen.

The speech has since been reported on by major newspapers, making the front page of London's Evening Standard, and prompting London mayor Sadiq Khan to describe Schumacher as "out of touch" and "just plain wrong".

It is not the first time the architect has made a controversial statement – but it is the first time he has done so since taking over as director of Zaha Hadid Architects, following the unexpected death of its founder back in March.

He has since put out a statement defending his intentions, and apologising to friends and colleagues for embarrassing them.

"I was hoping to stir a discussion and got much more than what I had bargained for," he said.

"The topics I touched upon turned out to be too touchy to touch at all in any direct or straightforward way, or so it seems." 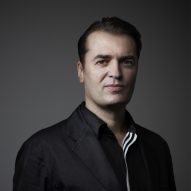