Sancal tasked the Stockholm-based studio with creating larger versions of the Tonella lounge chair in order to make it more suitable for spending long periods sitting and reading.

Note Design Studio wanted to ensure that the new version maintained Tonella's original design elements, which are based on the shape of a Spanish wine barrel.

Rather than using contemporary methods of modelling, the designers turned to clay to form the new shapes.

"The Studio decided that in order to capture the essence of the original chair, based on the shape of a Spanish wine barrel, they would need to go back to basics," said Sancal.

"Rejecting all the mod-cons of computer-aided design and 3D printing, they started with a simple ball of clay." 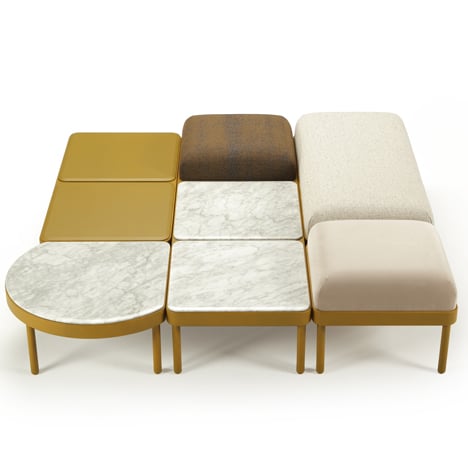 Sancal's 2015 collection includes furniture that pieces together like a puzzle

Like the original design, the new armchair and sofa feature barrel-shaped wire cages that form its base, but they now also feature thicker seats and a quilted seat cover that extends further down the legs.

"The whole proportion and the design language of the first, initial project has to be coherent with this new version, but we didn't want to do a simple scale-up," Note Design Studio's Kristoffer Fagerström explained.

"We worked a lot with proportions and the closeness to the floor, of course the softness of it, it really needed to be really, really softer, cosy."

"With its thicker upholstery, you can actually stay longer in these versions," added Charlotte Ackemar, also a studio designer.

The expanded Tonella seating collection  is available in a range of colours and materials.

It was launched during this year's Milan design week as part of Sancal's Futura collection, joining a range of products by Sancal that include furniture you can piece together like a puzzle and a suspended acoustic shade designed for meeting rooms.

Note Design Studio was launched in 2008. Its team of designers create a wide range of products, including office dividers for working people on the go and a dining theatre for Europe's largest mall.

For more information about the products, visit the Sancal website.