Dezeen has published the movie today as part of the VDF x Rosey Chan collaboration celebrating Chan's work and culminating in a live interview and exclusive performance at 5:00pm UK time today.

"This is the attempt to condense 15 years of collective design research into a paradigmatic sequence of animations, something I had been doing in my recent lectures on parametricism," Schumacher told Wallpaper magazine at the time. 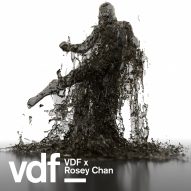 The video starts with abstract patterns, while later sequences show how parametrically generated forms can be scaled up to inform buildings or even entire urban districts.

The original soundtrack by Chan was written in just two days ahead of the film's premiere at the Elvis Zapp Urban Film Festival in Harlem, New York in 2013.

"In Parametricism, I was faced with a kind of unique challenge as the animation is very abstracted and also architectural," Chan told Dezeen." It doesn’t involve human beings or the kind of normal emotional range that I would relate to."

"So for that, I went into a much more experimental approach of montage, creating sounds in the piano, inspired a lot by John Cage and his philosophical ideas about music."

The post-production phase involved montage editing: "trying different things and also relating it quite accurately to the timing of the film," Chan explained. "So this was quite a radically different musical approach."

Chan studied piano and composition at the Royal College of Music in London and now performs, composes and collaborates with artists and designers.

Other projects include a performance for the opening of Fredrikson Stallard's Hybrideae exhibition in 2017; and Water Dancer, a new collaboration with artist Eyal Gever and dancer and choreographer Sharon Gever.